Bulahdelah Preschool received a visit from the Aboriginal Dance Group from Bulahdelah Central School who presented their choreographed indigenous dance.

This is the dance that was originally performed during NAIDOC week at Bulahdelah Central School. 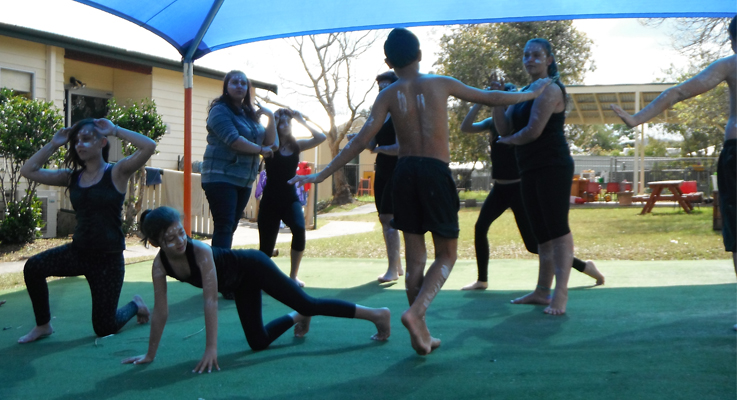 Gai Tooze, Director of Bulahdelah Preschool, spoke with Myall Coast News about the importance of this performance.

“This event was organised to celebrate Aboriginal culture and cultural diversity in our community.

It was also to develop partnership in our community and foster positive relationships and respect for all cultures.”

The Aboriginal dancers were covered in white paint and wore simple black clothing and performed outside with the students sitting around them.

“They were processing what was going on.”

Some Native songs were sang by the Aboriginal Dance Group and the preschoolers were able to relate to the music and sounds.

Then there was some hands-on activities as Preschool students were able to play the didgeridoo or the tapping sticks.

Stacey McLoughlin, one of the Preschool Educators commented, “The preschool children were interested in the performance and then when they were able to talk about it afterwards they all said the dancers were very good.”

It was a great opportunity for the Preschoolers to be involved with indigenous culture and a welcome visit from the Aboriginal students from Bulahdelah Central School.