THE long running battle over the confusing and outdated ferry timetable on Marine Drive at Tea Gardens may soon be resolved. 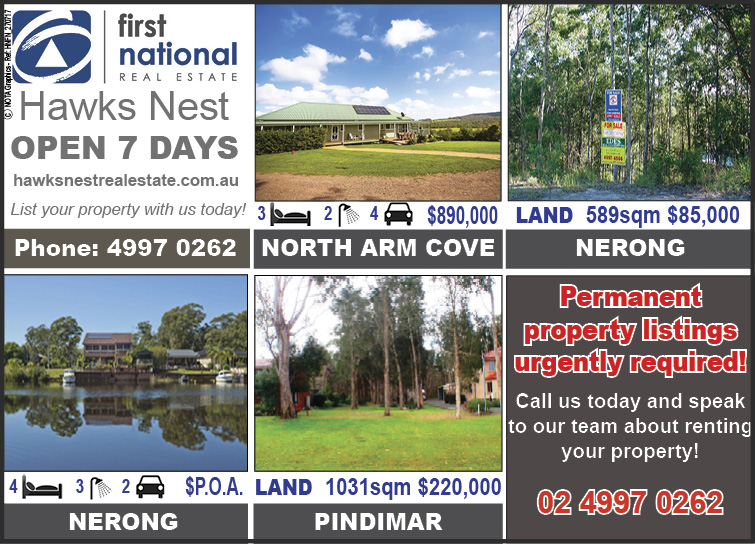 “I don’t want Council to be a road block to hinder residents, tourists or businesses in regards to the timetable issue,” Mr Aldridge told News Of The Area.

The sign dates back to when there were two ferry operators servicing the Tea Gardens/Nelson Bay run.

“The meeting was called as the Progress Association had received a number of complaints about the ferry,” Secretary Patricia Garrard said.

Reliability was high on the agenda.

“There is a view that the service has deteriorated considerably over the past six months,” Patricia said.

“There have been occasions where people have been left stranded at Tea Gardens and Nelson Bay due either to the ferry simply not showing up or not adhering to the published departure times.”

It was noted that businesses are suffering, that the schedule is wrong and cannot be relied upon, and access, particularly in Nelson Bay is difficult for people with limited nobility.

Also of major concern, the Hawks Nest Wharf is no longer being used as a pickup or departure point.

From the outset, Mr Thompson’s business advisor Malcolm Anderson made it very clear, “The Ferry Operation is not a public service and as such is not bound by local or state government regulations.”

He also noted that bad weather hindered daily operations and scheduling but that a new timetable was under review.

Myall River Action Group’s Gordon Grainger was not happy with the proposal.

“There has to be a better way of communication in regards to the timetable,” Gordon said.

“This matter does not end with this meeting,” Patricia said.

“It was an excellent meeting,” he told News Of The Area.

One thought on “Anger over Ferry Service, Tea Garden to Nelson Bay”