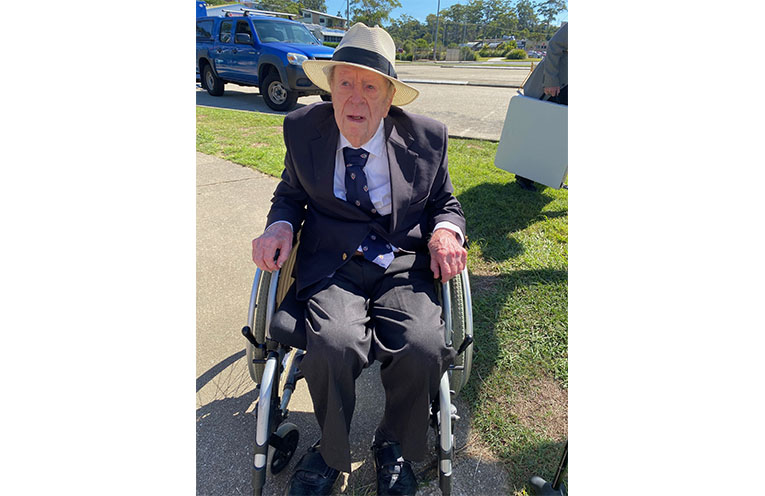 THE cenotaph at Nambucca Heads, located near the Nambucca RSL club, stood in great company on Anzac Day 2021 for the 10:30am service with an estimated 350-400 people in attendance.

It was a glorious day, with sunshine lighting the service in a warm glow.

Many veterans attended, alongside their families and community members.

Ivan Kinny, 97, attended the ceremony with his son and carer Paul Kinny.

Ivan, a decorated war veteran, fought at the Battle of Slaters Knoll in Bougainville in 1945 with the 25th Battalion.

“He’s someone to be proud of, he has just been a leader,” Paul said.

Following WW2, Ivan was a principal for approximately 22 years.

“He has passed on some special stuff to his students.

“The elation of surviving that night I think just impacted all those men forever.”

“Incredible going to another country and seeing how the third world lives.

“It gives you a sense of humbleness, when you come back to Australia,” he said.

When talking about the behind the scenes work that goes into organising the Anzac Day events Brad said, “It means a lot of organisation, it all comes together on the day and it all looks great.

“Anzac Day really gives me a sense of pride.

Brad also discussed the significance of the catafalque guard to ex-servicemen, “For those guys it means something special, they honour the fallen.

“Every cenotaph is considered a memorial to the soldiers who have fallen.”

Students from the local schools attended the ceremony, laying wreaths during the ceremony as a mark of remembrance and respect.

Dominique said the opportunity to represent the school at the Anzac ceremony was “Rewarding”.

They began by acknowledging the Gumbaynggirr people of Nambucca Valley.

The keynotes referred to history, before applying these experiences and learnings to the present and future.

“Today Australia pauses to remember the sacrifices made at Gallipoli and across other battles in WWI.

“To remember Australian soldiers who have defended our country since.

“To remember the aftermath of war, to remember the impacts of wars on individuals, families and countries in the hopes of learning from this in order to create a peaceful and united world in the future.

“Anzac Day to the Australian youth means what it does to many Australians, a chance to reflect on the sacrifices made by those who fought in WWi, in wars since, and who are still serving our country today,” they said.