An independent arborist report to the Great Lakes Council has ruled that the 60-year-old coral trees along Marine Drive, Tea Gardens should be removed. 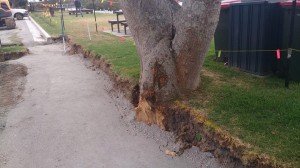 The council first announced its plans to remove the “unstable” trees, which were classified “noxious weeds” and known for dropping their limbs.

Further to this the trees’ root systems were damaged during the road works making them even more unstable.

A strong community stand against the tree removal took place last year but Deputy Mayor Len Roberts said it was time for the community to accept the fate of the trees.

“After receiving this report the decision is clear – these trees need to be retired,” Cr Roberts said.

“Now the council is informed that there is a risk to public safety we must act.”

“Things have changed. These trees have gotten older and in a storm they could just blow over,” he said.

Cr Roberts said he and the Great Lakes Council would be working with the Foreshore Reference Group to come to a solution about how to provide shade along Marine Drive when the trees go.

“We as a group will decide how to beautify the area and keep it shaded,” he said.

“Some people are saying we could put up temporary shade cover while others think we should plant evergreens in replacement.”