AS we celebrate Volunteers Week, it’s a great time to pay tribute to the people who give of their time to others, asking nothing in return.

One such volunteer is Tea Gardens local artist Geoff Moran.

Geoff describes himself as an enthusiastic amateur, but he’s much more than that.

His involvement began after he heard about a program called ‘Hospital Art Australia’ operating out of the Central Coast.

“I had contacted Hospital Art in regards to running a program at Peter Sinclair Gardens, but they couldn’t do anything for six months, so it went from there,” Geoff said.

Geoff decided to take the baton and run with it.

With the support of former Manager Rhonda Pitt, Geoff began his own form of ‘Hospital Art’ at the Aged Care Facility.

“I take small eight by ten canvasses and I draw them up before each class each week and colour code the areas to be painted,” Geoff told News Of The Area.

“We work in acrylics which is water soluble and non toxic.”

Resident Alan Stewart, who had his 100th birthday a little while ago, is one of  residents who enjoys the session every Friday.

The issue of funding for the program was solved with an approach to the Rotary Club which meets the cost of purchasing paint and drawing materials on a continuing basis.

“Geoff has regular budding artists at his weekly classes who show an enthusiastic and at times, creative approach to his expert guidance,” Rotary’s Ian Mackenzie-Smith said.

“Rotary is thrilled to be involved in programs such as this and is proud to be able to put into practice, their motto of “Service above Self”. 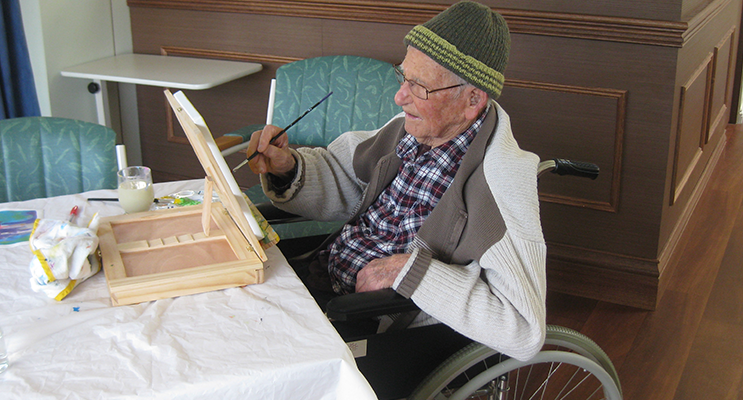