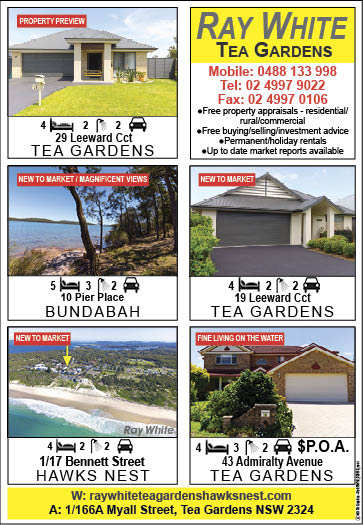 Our ‘roving reporter for the day’ Jack Drake took in all that was to be seen during Karuah’s Celebrations and reported back on the festivities to News Of The Area.

The Hunter Valley Chrysler club celebrated Australia Day on the river at Karuah.

Around a dozen Chryslers of various models, Australian valiants, older American models and modern PT cruisers were able to be viewed whilst also participating in a variety of activities on the waterfront .

Jack said, “A great day was had by all.”

“Festivities included the ceremonial “tossing of the thongs” and the now ubiquitous Lamb on the barbie.”

After participating in celebrations by the river, it was time for festivities and official ceremony proceedings at the Karuah RSL Club, where entries of cakes, jams, and produce had already been judged and decided upon, and a charity auction was ready to take place.

Jack said, “The auction commenced promptly at 12.30pm on stage, managed by our Secretary, Manager Ross Parr, ably assisted by the incumbent committee, with pre preparation by the office staff.”

“He created, as usual, a great fun filled event.”

“Eventually all items were sold, resulting in a final fundraising amount of $3000, which was donated to the local Bush Fire Brigade from Limeburners Creek,” he said.

During the evening, a fireworks display end a successful, fun packed, community day in Karuah.

Jack remarked, “Once again the Karuah RSL Club provided a spectacular fireworks display, commencing at 9.00pm, encouraging a remarkable turn out from the local population and visitors.”

A large crowd of community members gathered for the display, celebrating with friends and family.