The red transporter parked at the Rock on Wednesday 6 August is very well-recognised by boys and girls all over Australia. 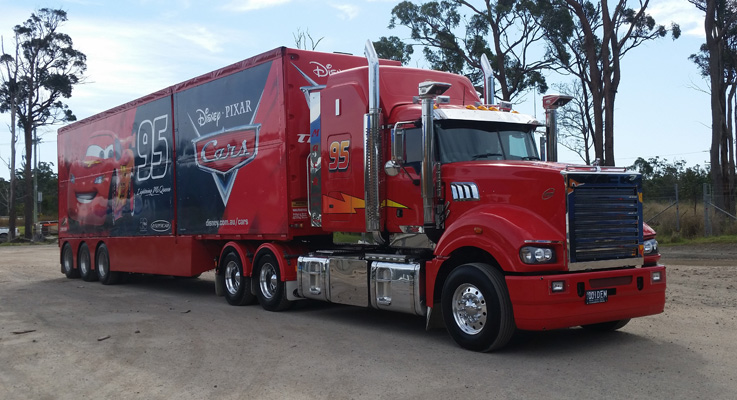 Mack Truck and Lightning McQueen are characters in the movie “Cars” and are part of the NASCAR racing circuit in the US.

But as part of the V8 Supercars Championships in Australia, the interactive Disney Zone, featuring Lightning McQueen and Mack the Transporter, are touring and putting on shows at certain racing events.

Mack Truck was at the Ipswich Supersprint on 1-2 August and then will appear at the next V8 Supercars round at Sydney Motorsport Park SuperSprint on 22-23 August.

So a pit stop at The Rock, on the Pacific Highway near the Tea Gardens turn-off was a well-needed rest before hitting the road again.

V8 Supercars driver Mark Winterbottom (whose name is used in the movie) said, “It’s great to see the new-look Disney Zone making its way around Australia as part of the Truck Tour.”

“Disney is such a great household name to have at V8 Supercars events, it really makes the track experience more memorable for kids,” he said.