Bob Baldwin MP and Minister for Communications, Malcolm Turnbull have announced that funding of $827,690 has been secured from the Federal Government and Regional Broadcasting Australia Holdings (RGBH) to improve terrestrial coverage in the Paterson electorate. 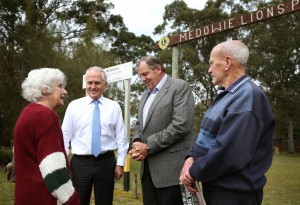 “Digital television reception has been raised as the number one local issue throughout the Paterson electorate,” said Mr Baldwin.

“Bob Baldwin has been relentless in fighting for residents experiencing T.V reception issues in Paterson over a long period and it is due in no small part to his advocacy that funding to improve T.V reception has been secured.”

“I am very well aware of the frustrations poor tv reception causes for people in Paterson,” Minister Turnbull said.

Mr Baldwin said, “More than a third of my constituents have been experiencing intermittent digital television reception for over 5 years.”

“Whilst I am disappointed with the delays to date, I look forward to working with RGBH, meeting their commitments and completing these important infrastructure upgrades,” said Mr Baldwin.