Brigadier Naumann was appointed to oversee the Hunter and Central Coast storm and flood recovery effort by Premier Mike Baird on 27 April 2015 following the Super Storm that affected so many people in NSW.

A group of storm affected locals attended and raised issues for comment by the team.

The general consensus was that the SES and other emergency services did a wonderful job, but that there is still a lot of work to do.

Issues ranged from the need for a longer free green waste time period to the offensive smell as water recedes at Jimmy’s Beach Caravan Park.

In response to this, both Brigadier Naumann and Robert Fish (GLC Engineering) took an undertaking to follow these issues at the earliest possible time.

Kate Washington asked about the possible Health Issues and was assured by Great Lakes Council that these are currently being addressed and that all parties will be briefed as information comes to hand.

A common theme was that the trees are still coming down, a result of the rain we have experienced since the storm and how it is affecting trees that were weakened from the storm.

Some were concerned that only the fronts or visible areas were looked after, with much more needed to be done in residents yards and especially those of more elderly residents who are incapable of performing the necessary work themselves.

Councillor Len Roberts commented, “Having seen the initial damage to areas, on return we see that this is an ongoing recovery and there is a need for specialist people and equipment.”

Councillor Roberts praised the efforts of all emergency services especially the SES adding, “We must remember that the initial priority of these services was to ‘make safe’ homes and public areas to minimize any chance of injury and to allow access for the ongoing recovery effort.”

Brigadier Naumann said, “This morning I spoke with the head of the Insurance Council of Australia in order to address compliance and expediting valid claims to assist those in the most need.”

“The Premier Mike Baird has made it very clear that the recovery of communities is now the priority and that this Recovery Task Force is to ensure that nobody is overlooked.”

“The Premier is adamant that this recovery needs to involve the three tiers of Government to give the best outcome’s possible.”

Kate Washington added, “I was recently stopped in the halls of State Parliament by the Premier who has shown a genuine concern for all persons affected by the disaster.”

“He (Mike Baird) asked after our region and assured me that we will be looked after in the aftermath of the storm damage.”

Councillor Roberts said, “The combined initial response to the emergency was fantastic, the level of co-ordination gave the public a very positive perception of what can be achieved.”

The group then moved on to visit damage sites in our area in order to better gauge where the recovery is up to and what more can be done.

“As part of this portfolio, I am only too happy to help members of the public in regards to problems of communication with regards to need resulting from this disaster. Please contact your council and they will be able to put you in touch with the Regional Disaster Co-ordinating Team,” The Brigadier added.

All in all, a very positive response from all levels and a relief to know that all concerned do realise that the recovery has just started and there is much more hard work ahead of us. 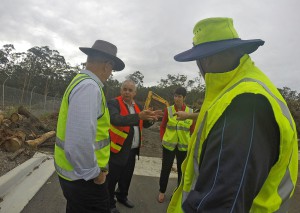 Work on the storm recovery action plan will continue at the third Regional Recovery Committee Meeting at Thornton today.

The weekly meeting is chaired by Recovery Coordinator Brigadier Darren Naumann and General Managers from all 10 councils that have been declared natural disaster zones, including the Great Lakes, have been invited to attend.

They join representatives from NSW Government agencies such as WorkCover, Roads and Maritime Services, Environmental Protection Authority, NSW Health and Department of Primary Industries, as well as stakeholders from farming, fishing, business and welfare groups.

The action plan will play a vital role in guiding the recovery effort over the coming weeks and months, and allow the committee to identify the major issues and priorities.

Brigadier Naumann was in the Great Lakes region on Monday 18 May, when he visited storm hit Tea Gardens, Hawks Nest and Jimmys Beach. He says recovery is progressing well despite the challenges ahead.

“I would like to congratulate all of the councils for rallying together and getting on with the job of cleaning up their backyards,” said Brigadier Naumann.

“There’s still an enormous amount to do, particularly removing and disposing of green waste, but I have been impressed with the recovery effort so far,” Brigadier Naumann continued.

Great Lakes Council’s Local Emergency Management Officer, Andrew Blatch said of the Brigadiers’ visit, “It was pleasing to welcome Brigadier Naumann to our region. I was impressed with his dedication in assisting the affected Councils recover and learn from the recent storm events.”

“After speaking with the Brigadier, we are confident the particular needs of the Great Lakes will be added to the recovery action plan agenda”, continued Mr Blatch.

For more information on the ongoing storm recovery please visit www.greatlakes.nsw.gov.au or www.emergency.nsw.gov.au