Featured as a web extra on 15 July on the Yahoo – Sunday Night website is Dave Mason, who is a bull-rider going for a title in Dallas, U.S.A. 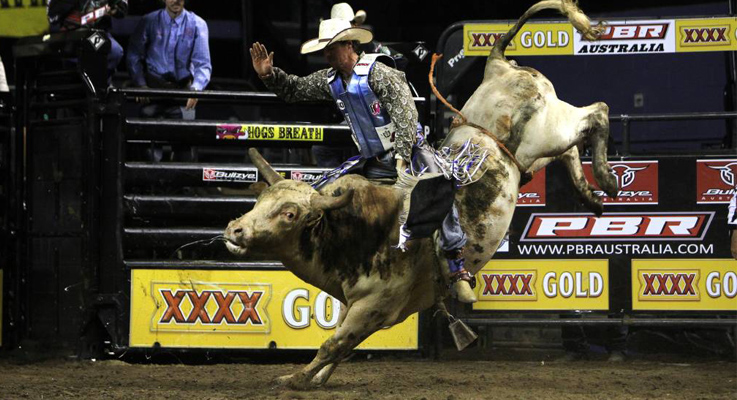 The story speaks with respect about an Aussie bullrider who is aiming to crack the world’s top ten and a world title.

Before Dave Mason moved to America three years ago to further his career as a bull-rider, he was a Bulahdelah local.

Dave was recently back in Australia competing in Townsville, Darwin, Brisbane and Sydney in the Australian Championships and returned to the U.S.A on 22 July.

He is well-liked and remembered by his peers and has lived in Myall Street with his family for his whole childhood.

He got involved with clowning and then bull-riding.

His mother said, “It’s in the family.”

“A lot of people don’t realise what’s really involved with being in Championships.

“Dave has to travel extensively, work-out to keep up his fitness levels and work on his skills.”

Dave Mason has become well-known and involved with the Australian Bushmen’s Campdraft and Rodeo Association.

He secured this coveted buckle at the Tamworth Invitational in front of a sold-out crowd.

Dave Mason was up to 16th in the world standings due to four wins in Australia in November 2014.

When asked about the danger of the sport, Dave’s mother replied,

“For Dave, it’s all about the adrenaline and I’m over all the nerves now.”