Dark Horses Galloping Towards Title Defence Last Thursday saw teams yet again converge on the Jack Ireland Sporting Complex for Round Eight of the Bulahdelah FC 6aside Football League. 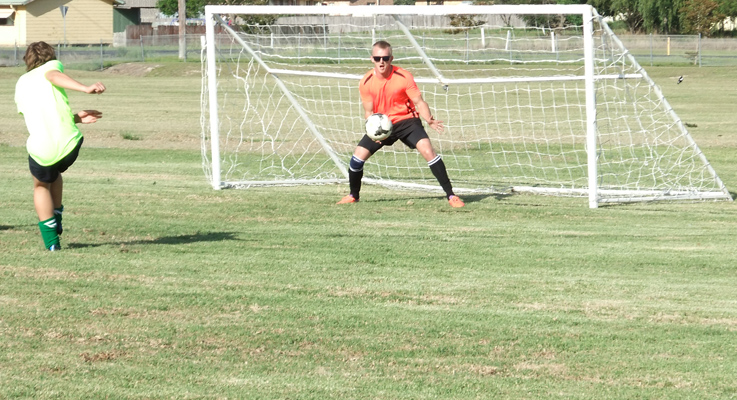 The afternoons proceedings getting underway at 530 on field one with competition minnows Manchesthair United and Barely Legal both looking for some much needed points.

Expected to be a close encounter this was anything but with Barely Legal running away with this one 8-1, MVP went to Raydmen Hobson who also bagged 4 goals.

The 630 games kicked off on field one with reigning champions the Dark Horses tackling 2nd placed Thunder FC.

In a much anticipated encounter it would be Thunder FC who would open the scoring early through a brilliant volley from “Shorty” Curnow at the back post, but the lead was short lived as the Horses hit back, and hit back they did running out eventual winners 8-2, moving the ponies into 2nd place on the points table. MVP Jacob King who was once again instrumental in a Dark Horses victory.

Field Two saw yet another “clash of the titans” with the table topping Le Worthless Peons taking on Red Rockets FC. In a much closer encounter it was the Peons that prevailed 3-1 keeping their unbeaten run intact.

The 730 matches saw Smith’s Lake Bottle-O bounce back from their recent slump and move into 3rd with an 8-2 win over a gallant Blue Marlins side. MVP Harry Reid.

Field two saw Robyn’s Renegades find some form in what started as an arm wrestle with Nearly Dead & Desperate.

Going down 1-0 early the Renegades turned it on in the 2nd stanza getting away with this one 5-1. MVP Nathan Grimshaw who had a blinder in goals for Nearly Dead & Desperate.

With only 3 rounds remaining before the finals it is anyone’s competition with only 1-2 points separating 2nd thru to 6th.