The Bulahdelah Open Girls’ soccer team took to the freezing fields of Bolwarra Sporting Complex on Thursday, 12 May for the annual Gala day. 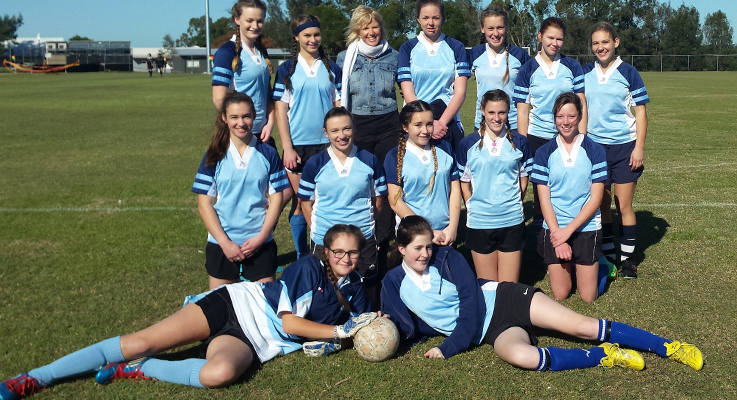 Donned in the primary soccer shirts – coach’s error- the girls did our school proud, taking out the first game 1-0 against Singleton:

“For a team that had never played together they did well. Their passing was strong and they had the upper-hand the whole game,” reported assistant coach Michael Chisolm.

His talents were needed early on when Taylor Boyle went down with a leg injury in the first half.

Determined to continue we practically had to chain her to the bench, ice bag strapped on.

Just a small representation of the passion and commitment these girls showed for the game.

Captain Chloe Lamborn scored the winning goal, picking up the ball from Crystal Maloney’s near miss just moments before.

The girls were hungry for the win and it showed.

Ellie Gooch, Hannah Rietveld and Katlyn Osborne were striking, out in front, breaking through wherever possible and were a force to be reckoned with.

Singleton was fortunate it was only one.

With two hours between games we attempted to keep our muscles warm but it proved hard.

Maybe because there weren’t enough carrots for sustenance to go around; maybe because of the overkill of lollies, but the open wintery fields took its toll.

In the first 15 minutes, of the second game, we had 3 more injuries and were frantically looking around for potential subs.

Whitney Thomson kept us in the game, diving and saving goals left, right and centre, despite a kick to the head and the bending back of her fingers.

The muscles loosened and the girls were back, helped out by a few encouraging screams from the backline’s Tamara Gooch.

Some began playing their best game of the day!

Bianca Mason shot through numerous kicks and Ellie Gooch’s regional cross country legs were there to capture them, making a few solid attempts at goal.

Boadicea and Eryn were on the sidelines mentally cheering – too injured to make the sounds out loud – which meant Tayla Boyle was on again despite her limp.

The back line was fired up and Tiffany Wood, Chloe Lamborn, Tamara Gooch and Sally Tennyson were almost impassable.

With about 15 minutes left, Bianca Mason’s legs could take it no more; she collapsed on the ground, practically snoring, and utterly exhausted.

The girls had played well but somehow the talented Maitland Grossman players were too strong.

They were fresh due to a forfeit on their first match, and our girls- despite trying their utmost- couldn’t quite fend them off as much as we wanted to!

The powerful and fabulous Bulahdelah Open Girls’ soccer team went down with a noble defeat of 5-0.