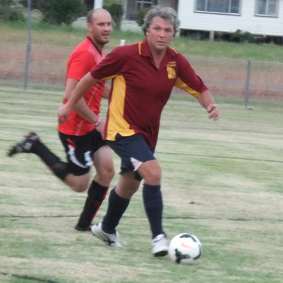 In a week of notable absentees due to the local year 10 formal, several teams suffered due to the depleted numbers, whilst others pounced on the opportunity.

Two rounds in and Le Worthless Peons have taken an early ascendency after a resounding 15-1 win over a depleted Blue Marlins side allowing them to leap frog Robyn’s Renegades, whom were gifted a 5-0 win after Manchesthair United forfeited, on goal difference. MVP Gabby Keaton.

In other results a 5 man Thunder FC dug deep to overcome Barely Legal with quick fire successive goals late in the 2nd half. MVP Steven Curnow.

Smith’s Lake Bottle-O continued their reinvention this year with a 3-2 win over Red Rockets FC in what was the match of the night in a see-sawing affair. MVP Darren Carroll.

The Final match of the night saw the reigning champions the Dark Horses get their campaign back on track with a 3-0 win  against an under strength Nearly Dead & Desperate side.

MVP Emily Bidgood.  Round Three matches get underway at 530 this Thursday.