GLENN Grainger struck gold at the recent Zone Bowls Championships, taking out the Rookie Singles title and securing his place in next month’s NSW State Finals. 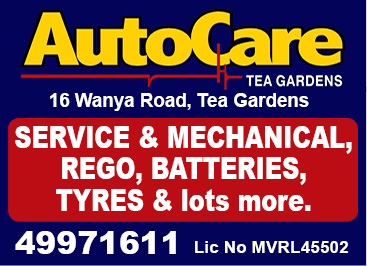 Teammate Guy Rowe was also in top form, finishing in second position at the end of the two-day knockout competition, held at Sporties Tuncurry.

Representing Bulahdelah Bowling Club, Guy and Glenn bowled their way through a competitive field of 22 players in the early rounds.

Strong performances from the local boys resulted in both finishing at the top of their respective draws.

With a vocal team of local supporters behind them, Glenn and Guy faced off against each other in an all Bulahdelah Grand Final played over 23 ends, with Glenn claiming the win 17 to 14.

“We had some awesome competition up there,” Guy said.

“Glenn bowled exceptionally well on the day, and deserved the win.”

This was the first time Glenn has competed in the competition and came up against Rookies representing six Mid-North Coast clubs.

“The other teams put up quite a fight,” Glenn told News Of The Area.

“Bulahdelah finishing one and two is unreal, it has surpassed every expectation we had going into the competition.”

The statewide Rookie event is for players with no more than two years’ experience in the game.

Glenn now has a crack at the state finals to be played at Raymond Terrace next month.