Fines recently issued by Great Lakes Council in regards to illegal clearing of trees resulting in polluting and blocking Nanabah Creek by a property developer at Bundabah, have reportedly been met with remorse by the owner, Tea Gardens Farms, who complied with Councils direction to stop works immediately once the infringement had been noticed. 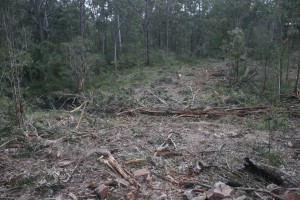 Tree’s had been illegally cleared and pushed into Nanabah Creek, blocking the creek system.

“Trees were pushed into the creek. Subsequently work was stopped, the owner complied and an investigation proceeded,” he said.

Mr Pevitt added, “The creek had been completely severed by the trees being put in the creek and compounded.”

“There were a lot of earthworks either side of the banks, and I requested that the owner immediately put up sediment erosion control fences, and that was done within the hour of my request,” he said.

This was the second recent fine for the developer, who was also fined another $8000 on 15 October 2015 for excessive clearing of land at 101 Bundabah Road, Bundabah.

Mr Pevitt told Myall Coast News, “Consent had been given for clearing of some land at 101 Bundabah Road after an application had been approved, but unfortunately the clearing exceeded the area approved by Council, so the maximum on the spot fine of $8000 was issued.”

Bundabah resident Ross Griffith who’s 14ha property is surrounded by the property fined doesn’t seem to think the message has got through.

Speaking with Myall, Coast News, Mr Griffith said, “If the average Joe like you or I did what this developer has done, without the proper approvals or consent from Council we’d get hammered for it.”

“The fine issued to the owner is a joke,” he said.

“They (the owner) has previously applied to develop an Eco-Resort here at Fame Cove, which was rejected by Council previously in 2005.”

“They have also been previously fined after sediment polluted water flowed into North Arm Cove in 2009, in that case the Land and Environment Court prosecuted them for $200,000.”

“It would appear they just keep doing what they want,” he said.

Mr Griffith concerns also extend to the fact that as the land is now cleared, despite no environmental impact studies being carried out, that Council may choose to re-zone the land.

“I’m feeling like my hands are tied, because if Council do re-zone the land there really isn’t much I can do about anything else that proceeds on the land owned by Tea Gardens Farms,’” he said.