THE community of Anna Bay is forever grateful for the hard working and dedicated volunteers of the local surf lifesaving club. 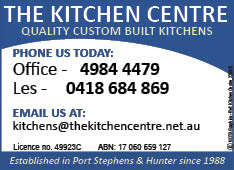 The Birubi Point SLSC in turn owes a lot to the foresight of predominantly three people – founding members Peter and Shirley Broadfoot, and president for the past 14 years Rob Duff.

Last June the 69-year-old Duff decided to call in quits, handing over the reins to another longtime committee member Helen Ratcliffe.

Duff, a life member, said he would remain involved with the club but believed it was time to allow new blood at the helm.
“When I arrived the club was still in its infancy, there was no baggage, so I was virtually given a free rein in regard to development and growth,” Duff said.

“One of the first things I introduced was to make it known as a family club and to set up an intensive and affordable training program for patrolling members.”

While these strategies have been highly successful, Duff’s true legacy would be overlooking the building of the $4.5 million clubhouse opened in December 2013.

“The clubhouse was a massive effort involving all three levels of government, the Worimi Aboriginal group, NSW Surf Lifesaving, the Anna Bay community, and our friends at EJE Architects.”

From humble beginnings in the 1990s, the Birubi club has grown considerably with a membership of more than 300 patrolling and junior members.

The newly elected president, a 48-year-old Corlette mother-of-two, says she is excited to be taking over a facility in great shape.

“My job is to maintain the momentum started by the Broadfoots and pushed along by Rob.

“We intend to keep up the training, the bronze medallions while continuing to attract junior members to the weekly meetings and their families.

“Our major objective is to patrol the beach during the summer months, hence the need for training. Being the most qualified club in the Hunter is something we are immensely proud of.”

And the proof is in the pudding. Each season the club performs numerous rescues and preventative measures to ensure the safety of the swimming public.

Registrations for the 2017/18 season are now available online, with the season set to kick off on Sunday, 17 September.