The statutory Bush Fire Danger Period (BFDP) commenced on Wednesday 1 October 2014. One-third of the State has already commenced its danger period due to dry conditions. 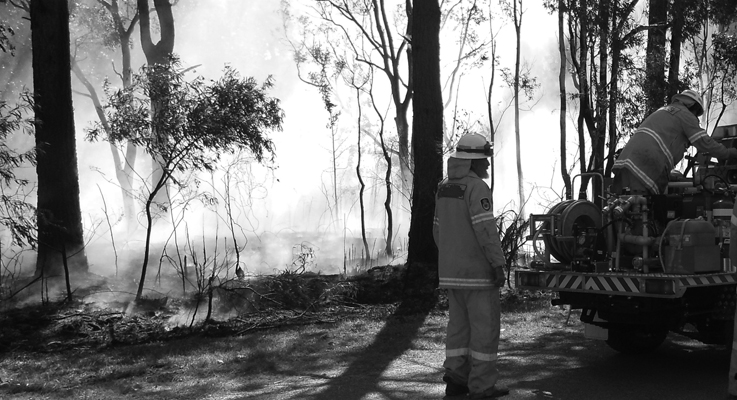 A Bush Fire Survival Plan can help you make important decisions about what to do during a fire, for example when to leave, what to take and what to do with animals.

Many people have died during bush fires because they’ve left their decisions to the last moment.

The Bureau of Meteorology advises that the outlook through to December indicates warmer than normal temperatures for the entire State.

You don’t need to live right on the bush to be at risk from bush fires.

Burning embers can travel some distance, setting to fire to homes that are well away from the bush.

In fact, the majority of homes destroyed in bush fires are because of what’s called “ember attack”.

Fire & Rescue NSW Commissioner Greg Mullins confirm it is also very important for people who do not live close to bushland to make preparations.

He said, “Embers from bushfires can travel great distances, across several streets or even up to 20 kilometres in the worst of weather conditions and when they land they can start new fires,”

Does your area have a history of bush fires? Think about the area you live in.

If fires have happened there before, they will almost certainly happen again.

Know the fire risk in your area and prepare for it.

A well prepared property includes trees and shrubs that have been trimmed and a cleared area where you and firefighters can protect your home if needed.

The NSW Rural Fire Service spokesperson said, “If you need to travel through bushland areas to leave your home, you’re at risk of being caught in a fire.”

“Being caught in the open or in a car are among the most dangerous places during a bush fire.”

Local Real Estate Agent also are proactive at this time of year, reminding not just home owners, but also tenants should take due care as well.

Local Agency Mick Rumble said, “For families considering holidaying away from home this summer, people should let a neighbour know where you’ll be and how to contact you.

“Both homeowners and also tenants should take steps to reduce their bushfire risk,” Said Mick Rumble.

Even if you’ve made a Plan in the past, check it and update it if needed.

It’s important to sit down and talk about your plan with your family, that way, everyone will know what to do if a fire starts.

Making your Bush Fire Survival Plan is probably easier than you think.

If you need any assistance goto the NSW Rural Fire Service website http://www.rfs.nsw.gov.au/

Fines have also increased in the lead up to the Bush Fire Danger Period. Discarding a lit cigarette now carries an increased fine of $660, which doubles to $1,320 during a Total Fire Ban.