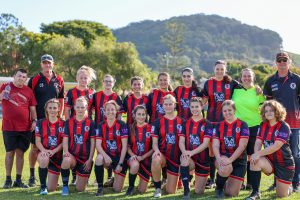 THE Coffs United Lionesses won the Women’s Division Two competition in style, notching up fifteen wins to secure the Premiership and remain undefeated for the season.

If the lockdown is lifted on 10 September, the Lionesses will play the Sawtell Scorpions in the semi-finals on Saturday 18 September at their Mclean Street home ground, with the grand final scheduled for 25 September at C.ex International Stadium.

It’s been a transitional year for the Lionesses who lost many of their senior players through retirement and were replaced by juniors stepping up from the under 16s and 14s.

Eighteen-year-old Jordan Maddalena, one of the more seasoned campaigners, was given the captain’s armband in February and hasn’t looked back since.

“I think we are all very chuffed with getting the Premiers title.

“Despite not having numbers for a full squad for a big chunk of the season and being lowered into the second division, I feel the girls have really stepped up this year.

“The effort that has been put in to getting to training and staying committed through the COVID season has been difficult and has definitely taken a toll for the most part but it has not dampened our spirits and we are just as hungry for the finals series if it is given the all clear to go ahead.

“Our two coaches Andrew Mallett and Col Smith have definitely had a big part in our achievement this season and have sacrificed a lot whether it be putting aside their personal lives to make sure the cones and poles are set up twice a week, pushing us mentally and physically.

“The bond we have created this season between the girls has been as strong as ever, including our younger players from the below age group who have been involved with the team, helping us fill out the match card almost every Saturday.

“Aside from being undefeated this season, we aren’t all about that winning title, we are working towards the bigger picture of developing a future in women’s football here at Coffs United.

“As captain of the team I am so excited for the future and am eager to see where all our hard work and dedication to football will take us,” said Jordan.