COMMUNITY concern over the recent pollution of Woolgoolga Lake will see Coffs Harbour City Council investigate the cause of the breach.

Members of the Woolgoolga community raised their concerns about a potential pollution breach from what they believed to be the nearby Wiigulga Sports Complex construction site via social media on Thursday 1 July.

Woolgoolga Lake Working Group (WLWG) secretary Karen Dallas said the group was first informed about the issue via community comments on social media and stated that the group was “incredibly sad” to see the siltation and sedimentation breach.

“It is incredibly sad to see the water quality of the streams in the Woolgoolga Lake catchment impacted by such heavy suspensions of sediment in the water to pollute it severely,” Ms Dallas said.

“Thank you to the vigilance of the Woolgoolga community for noting and informing us.”

Ms Dallas said the Woolgoolga Lake Working Group has since contacted all relevant stakeholders to inform them of the pollution breach, including Council and the NSW Environment Protection Authority (EPA).

“This latest wash into the Lake makes a severe impact on the Lake and its environs,” Ms Dallas said.

“The dense amount of suspended sediment, that is soil in the water, has turned the water brown and cloudy.

Ms Dallas called on sites near the lake to ensure they are not causing any possible pollution into the lake.

“Construction sites, agricultural developments when large areas of land are being cleared and dams being built need to ensure that their erosion and sediment control plans are effective in ensuring that sediment laden water does not run off their sites and into natural waterways,” she stressed.

“The local waterways are still recovering from the extreme rainfall events in March and this avoidable incident is putting extra pressure on them.

“There needs to be education of the devastating long term effects this will have on the Woolgoolga Lake.”

Following community complaints, Council’s officers are investigating if sediment associated with works being undertaken at an agricultural site close to the Wiigulga Sports Complex has contributed to the sediment runoff and will undertake the appropriate compliance action to ensure the appropriate controls are in place.

“Whilst not suspected to be the primary site of concern, the contractor working on the Wiigulga Sports Complex also, once made aware of the issue, reviewed all their current controls and, in addition, increased the levels on the perimeter silt drains and sediment control measures as additional precautions,” a Council spokesperson stated. 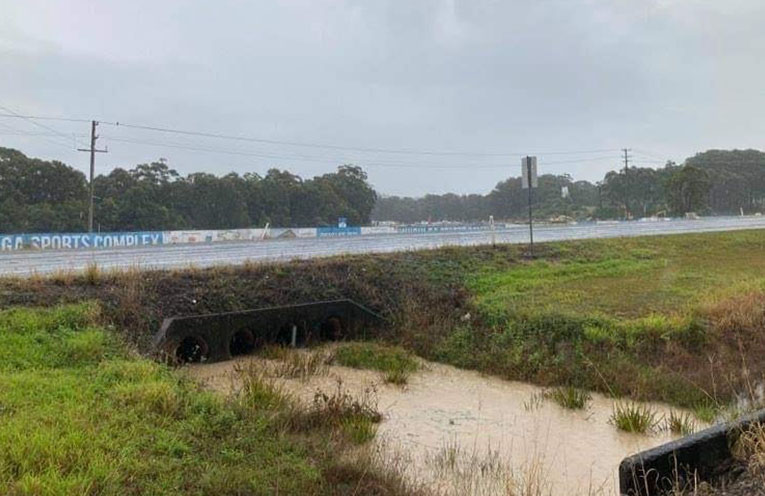