Great Lakes Council has applauded the many community groups and individuals who have worked together to create the Lone Pine Memorial Park in Tuncurry. 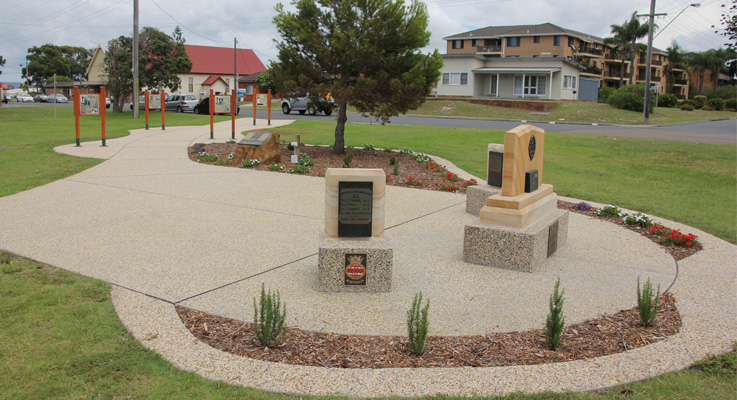 “Thanks to the RSL Forster-Tuncurry Sub-Branch, the Rotary Club, students from Great Lakes College (Forster and Tuncurry) and countless individuals, our community now has a  large war memorial space which will accommodate more people during this year’s commemoration of the 100th anniversary of the Gallipoli landing at Anzac Cove on 25 April 1915″ said Mayor, Cr Jan McWilliams.

The upgrade of the War Memorial was undertaken entirely by the RSL Forster-Tuncurry Sub Branch, with grants received from the Federal and NSW Governments and funding from Great Lakes Council to upgrade the Memorial before the 100th commemorations.

The Sub-Branch worked with Council to prepare a concept plan to update and improve the new Memorial and to complement the Lone Pine tree that is a feature of the Memorial.

The pine tree in the park is a descendent from the original “lone pine tree” at Lone Pine Ridge, Gallipoli and was planted in Memorial Park by the Tuncurry RSL Sub Branch and local school students.

Special signage was designed by students from Great Lakes College Forster and Tuncurry Campus and installed in the park which depicts the “Battle of Lone Pine” with all seven VC recipients acknowledged.

The RSL arranged a combined planting of trees which was undertaken by representatives from local primary schools.  Each tree represents a significant war campaign in memory of those who served.

Council worked in with the RSL in completing the project and assisted with funding the extra pebblecrete pathway ($11,000) to accommodate the signage, installed the signs and landscaped the park and gardens.  Council also provided the trees, tree guards and plaques and assisted with the planting.

Other facilities within the Park have also involved many community groups.  The barbeque shelter was renovated by the local Rotary Club, while the Peace Pole was installed 2002 by the Community of Christ Church.