The Westpac rescue helicopter is currently at Salamander Bay to pick up a 40 yo male who has suffered suspected serious head injuries. 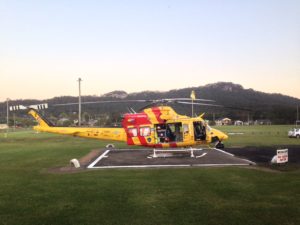 The man  fell 4 metres from a roof and hit his head on a pallet of bricks at a construction site at Corlette.

He is currently being stabilised by ambulance Paramedics and the helicopter medical crew.

He will be flown to the John Hunter Hospital.

The Westpac Rescue helicopter has very busy of late, as only yesterday the helicopter was called to Bulahdelah to attend to an 18 year old male who sustained serious multiple injuries.

He came of his motorbike at a reported 100kph.

News Of The Area will keep the community up to date.