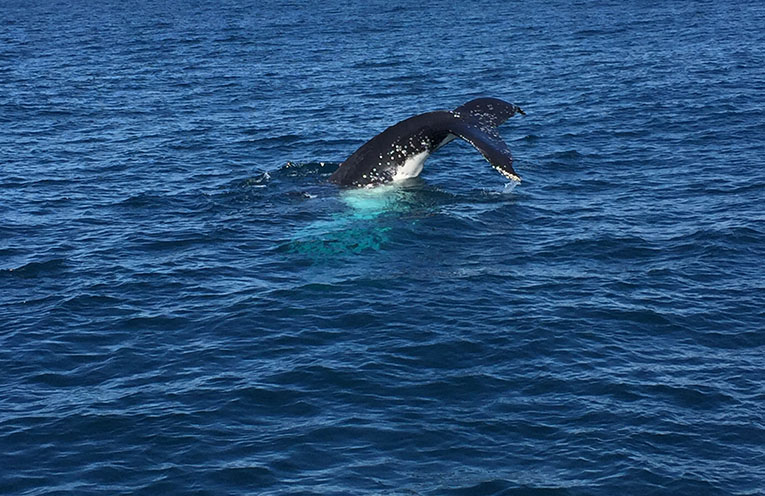 AN extension of time to complete the $1.1m Woolgoolga Whale Trail project will be sought by Coffs Harbour City Council following community concern over safety issues at a section of the proposed whale trail.

Cr Tegan Swan moved a motion at Council’s meeting on Thursday 22 July that Council request more time for possible changes to be made to the project, following community concern over safety issues at the Carrington Street/Pollack Esplanade corner of the project.

“In fairness to all the people who have put in so much work to this and also for our own peace of mind as well that we’re willing to just do this one step,” Cr Swan said.

“It is so important, however this project ends up coming to fruition, we are one of only 11 sites around Australia who have this whale trail.

“Nature-based tourism is exploding and this is actually an asset, not just for the Northern Beaches, but for all of Coffs Harbour.”

Cr Sally Townley said she was “happy to support a relook at it” but stated that Council’s concept plan for the Woolgoolga Whale Trail may still end up being the final plan after both Council’s plan and the community’s plan are reassessed.

Kath Puddey spoke at the recent Council meeting in support of the community plan for the Woolgoolga Whale Trail on behalf of the Northern Beaches Residents Association.

Ms Puddey said there were “two sticking points” with the project along Pollack Esplanade and Carrington Street at Woolgoolga, with pedestrian and cyclist safety an issue.

The Association is calling for the construction of a two-metre raised boardwalk through the bush on the Pollack Esplanade/Carrington Street corner to ensure community safety in this high traffic area.

“The corner of Carrington Street is a real challenge, but safety is our priority,” Ms Puddey stressed to councillors.
“Let’s relook at it and relook at that corner, the corner is the sticking point.

“We want to be sure that we get people safely up Carrington Street.”

“It needs to become a town asset,” she said.

“Let’s do it right people, let’s step back, let’s take time to reevaluate this.

“We’ve worked on this for five years, let’s get it right.”

“As local residents, we walk, we cycle, we drive this area every day,” Ms Grainger said.

“At peak times we have surf club events, we have community events and Carrington Street and that whole area becomes a car park, so we have cars everywhere.”

Ms Grainger called on councillors to be proactive and forward plan.

“We have a responsibility to make this a safe environment for everybody to enjoy,” she said.

“The old adage ‘do it once and do it well’ couldn’t be more appropriate here.

“Let’s have our priorities right and put people’s safety above all else.”

Council unanimously resolved for Council to write to Infrastructure Australia (the funding agency for the Whale Trail project) to request an extension of time for changes in project delivery timelines and deliverables, and in the event that the extension is granted that Council create concept drawings of possible path alignment options and put these on public display, and pending path alignment chosen, undertake relevant environmental and engineering studies and bring the proposed path back to Council for determination.

The Australian Government’s National Whale Trail initiative identified Woolgoolga Headland as a key site in 2015, one of only eleven in Australia.

The aim of the Whale Trail initiative is to develop a national whale watching network to encourage knowledge sharing among locals and visitors on the habits of migratory whales and coastal conservation.

Council prepared a concept plan for Stage One of the Woolgoolga Whale Trail, linking the Woolgoolga Beach Reserve to the existing Solitary Islands Coastal Walk on Woolgoolga Headland.

Stage One will be funded by a $1.1million Community Development grant through the Commonwealth Government Department of Infrastructure, Transport, Regional Development and Communications.

The Woolgoolga Whale Trail project is currently required to be completed by 30 November 2021.