Christmas and Birthdays can be a joyous time for most but for others out there forgotten about, it’s just another day or a reminder of what once was and a family destroyed by violence.

Thirty nine year old Damien Rider knows that pain all too well coming from a childhood of violence, living in rock caves and under jetty’s from the age of 6 because under his bed couldn’t protect him, not just from the physical abuse but from the terrifying screams, deadening thuds from a fist and smell of blood. 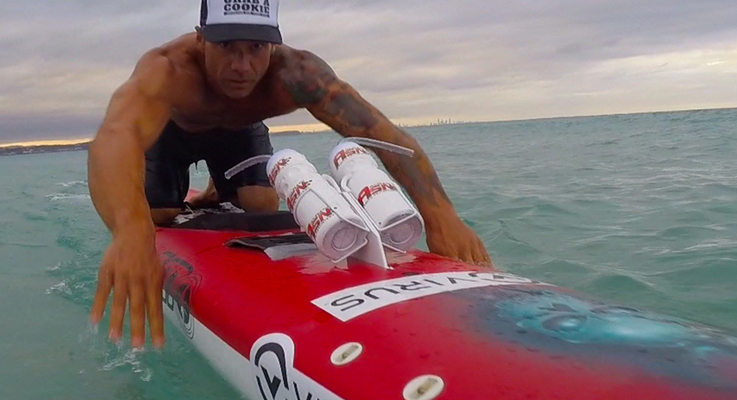 Making him shake and scream so hard but nothing comes out.

See the bruises go away but the inner pain, frustration, nerves and emotion remain.

From the exterior things may seem ok and even happy but peeling back the layers its easy to see they are still living in fear, searching for peace and their soul.

Damien has lived a full life, travelled the world, successful businesses, creative, ambitious and caring but to all of them there was an under current of a lost soul searching, searching for his identity, his place and his peace.

Damien considers himself one of the lucky ones by only in the last 12 months really finding peace and finally being able to rebuild.

This came at many losses in his life, sacrifices and a willingness that goes beyond anything imaginable.

Finding his peace in the ocean he knew he had something special to share.

Damien contacted a Child Abuse awareness organisation and asked what he could do to help.

He decided to investigate his newfound sport of Paddleboarding and see what the World Records were, thinking he had to do something big for anyone to hear his voice.

Finding a record being the longest distance in 24 hours he decided he would drop everything and train hard that, hoping it would inspire past and present victims.

As the weeks drew near to his record attempt he began taking close note of what the organisation he was promoting was actually doing about the problem and where was the hundreds of thousands of government funding going to.

From his discoveries Damien had to step away from the organisation (one of the major ones on this issue) and knew he had to do more.

It was almost a light went off and then a brighter one on again.

He constantly gets stop at the local coffee shop and messages through social media from past and present victims, thanking him for being their voice through the promo clip he produced.

This made him decide to start his own organisation Paddle Against Child Abuse (PACA) and actually work towards helping and raising the awareness of the whole of child abuse and neglect.

When most people think of abuse the stereotypical issues that come up are Male domestic violence towards women and Male abuse against children.

These are 2 very serious issues indeed but it stems so vaster.

The mother having more kids for welfare money, wealthy professionals sending their kids off the boarding school and paying their love off with money, the mother allowing the male to continue to commit to offences, the child care centers and babysitters rough with the kids, the mother using the system in an improper way to keep a father from his child (NSW Police put out a brief campaign stating, “it’s not the out of control but the control that does damage“) and the latest fear being dating sites, where single mothers are meeting random guys and inviting them to their place where their children are.

This is a bigger problem than people understand for many reasons.

For the children it is a tough enough time trying to work out why their dad isn’t there or who he is, then confused by who the multiple men are coming out of their mothers bedroom.

They can get attached to some of them and build a bond only for the mother and the partner to split or there’s the risk of abuse.

Most of the time the children blame themselves.

This builds up over time and their worth is destroyed as is their trust and love for another.

They begin to have their own exit strategy, panics and outbursts at first sign of losing someone close.

So they remain alone or spiral on a path of self-destruct.

Another major issue, which is looked past, is The Cycle.

The emotions and actions how to deal with situations are embedded into them from a young age and subconsciously brought out in today’s life.

When faced with a similar situation they are triggered off to the emotion, actions and what they have learnt which is all they know.

This makes it hard to break the cycle as they keep losing anyone close around them and the weight gets heavier.

People complain about drug addicts, alcoholics, bikies, bums on the street, violent mothers and fathers, people with no joy in life, no love or who have nothing.

But no one wants to help where it begins.

Many organizations put out expensive campaigns about raising the awareness of issues; issues we are all very aware of but few are doing anything about in our country.

For the most part these campaigns are purely so the organization can get more funding by promoting their name and their cycle of awareness begins again with nothing really getting done.

Damien finds it strange how so many will give so much to help children in other countries, which don’t get me wrong they really need the help also but these people turn their back on the problems in their own backyard.

The aim of Damien Rider and PACA is to grow step by step the trust and show what PACA represents.

The goal of PACA is to have a beachfront safe house to rebuild these broken souls, by way of the ocean sports, learning skills through trades and small businesses, health and fitness.

The safe house will be a place to mediate and reconnect family’s backs together in a peaceful environment as an alternative to a harsh stale room, using the oceans calming ways.

A place with no pressure and all involved in any way have an understanding and a focus to help begin to set life straight and hand picked professional at hand offering tools to break the emotion.

PACA recently put a 2 day festival on in Rainbow Bay / Gold Coast showcasing some of the ocean paddle sports, to help inspire victims and show them what the ocean has on offer.

PACA launched a surf wax COOKIE WAX – SUPERFOOD FOR YOUR FEET – with sales to be used as revenue to help kids. Any money that was raised over the festival PACA bought Christmas presents for kids in need.

The next step for Damien is he will begin a voyage on the 3rd Jan 2015, from Coolangatta / Gold Coast and paddle approx 50km a day on a paddleboard propelled by his hands until he reaches Bondi / Sydney.

Along the way he will try to involve as many as he can in each town community, whether it being just a chat about what he is doing or have some join in on legs of the paddle.

He is not raising money or asking for donations, he is simply letting those in need know, that there is someone out there going to extreme lengths to show there is light at the end of the tunnel and there is someone who is there for them.