Long-serving Bowling Club Secretary, Daryl Martin, has been recognised by Bowls NSW for his contribution to bowls and to the Tea Gardens Country Club Bowling Club.

At the Annual Combined Presentation Night, Daryl was presented with the State-wide award for Volunteer Club Administration.

The award was one of four presented to various volunteers around the State who will now contest the Bowls NSW  Volunteer of the Year Award to be announced at a black tie event to held in Sydney in February.

Daryl first joined the Bowling Club at Tea Gardens in 1983 when he took up a teaching position at the local public school.

In the absence of a secretary, Daryl volunteered to fill the position until another person could be found.

From 1985 to 2014-15, with only a two year break away from the position, Daryl has been the Bowling Club’s Secretary for a total of 26 years, a position he holds at the present time.

As well as Secretary, Daryl is also a qualified Club Lawn Bowls Coach and a level 2 National Umpire.  He has been an umpire for 26 years and is a member of the Newcastle District Umpires’ Committee.

His duties include instructing and examining other umpires at the Club and throughout the area.

At present he contributes an umpire’s article to the Newcastle Based Bowls Magazine, “On the Green”, which is circulated throughout Newcastle, Central Coast, North Coast and Hunter Districts.

Daryl’s coaching qualifications span 20 years, during which he has instructed and encouraged many new bowlers at the Club.

He has encouraged others to become coaches and the Club now supports a total of seven coaches.

For 15 years Daryl has been a Delegate to the Newcastle District Bowling Association and he has acted as Master of Ceremonies at the Annual Combined Presentations Night Awards on more than twenty occasions.

Daryl has performed with credit on the bowling green.

He has been the Club’s Singles Champion on two occasions and runner-up once.

He has been the Club’s Minor Singles Champion.

He has been part of the Fours and Triples Championship teams on more than eleven occasions and runner up in these events six times.

The Pairs title continues to elude him being runner-up in this event twice.

He has won the Mixed Pairs event on two occasions and has also been runner-up twice.

In 1995, in recognition for his involvement and service with the Club, Daryl was endorsed as a Life Member of the Tea Gardens Country Club Bowling Club, a title he holds with great honour. 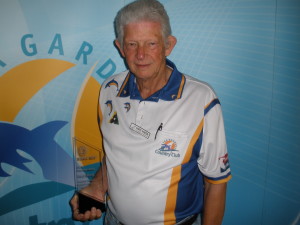 Daryl, the longest serving active bowler in the Club, is the first and only Life Member of the Club.

In 2012 the then newly constructed synthetic green was named the “Daryl Martin Green”.

It is doubtful that any other member of the Tea Gardens Men’s Bowling Club could hope to emulate Daryl’s achievements both on and off the green.

This recent award is more than fitting and thoroughly deserved.