“IS the road to Buhladelah blocked?” I asked the postie as he stopped to deliver the mail.

“No” he said, “You can still get through but there’s a warning of a new storm front coming.

“There is an east coast low that will meet up with a trough system from the west,” said the postie. 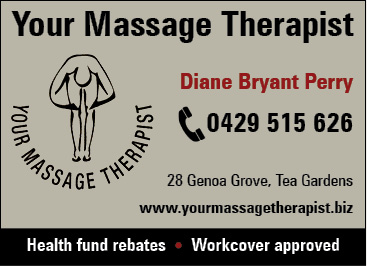 “Oh blast” I thought as I tried to go over the last few days of torrential rain in my mind.

The other day while chatting to neighbours at the waterfront here in Nerong, I was half joking with them about whether the water would reach up to the doorstep of Annie’s, which was once a popular restaurant.

None of us thought it could happen.

I’ve lived in Nerong for 20 years and have never seen water rise above the ramp.

I walked down to the ramp and was confronted with a disaster scene!

The river was up to the front door at Annie’s, now known as Diesel Dave’s.

I waded in up to my waist in water near the front gate.

The road past the community centre was now under a metre of water.

The houses on the opposite side of Annie’s were now almost level with the river.

A canoe floated upside down near a submerged tinny.

An eerie silence was broken only by the cries of a yellow tailed cockatoo.

Water lapped around the table and chairs of the community centre.

I waded in the water, once more up to my waist in the aptly named Waterhen Park.

A four wheel drive went past the community centre with water up to the top of its wheels.

For a moment I felt glad that I had bought on the other side of the hill.

My house is on the high side of the road coming into Nerong from the highway.

People on this side of Nerong often refer to themselves as fibros and the waterfront people as silvertails.

Somehow you felt safer on this side away from potential waterfront river flooding.

That morning however, my neighbour Joan came over to say there was flooding in the properties on the other side of the road.

She was holding two chooks.

‘Can you look after these?” she asked.

“My friend across the road owns them but her property has flooded.

“Her four other chooks drowned in floodwaters in their backyard last night!”

I walked over to the other side of the street and looked at the houses.

All the backyards were inundated with water from the lake at the back.

In some backyards the water had come up to the backdoor.

Some were thinking of evacuating.

During the day SES crews appeared.

By Monday evening the rain had eased.

The frogs sung in the water soaked evening landscape.

A car drove by in the rain soaked, potholed road out the front.

A rush of water surging past its tyres.

Neighbours stood out the front of their properties wondering if the rain would ease off.

The highway was silent.