THE controversial Yellowtail Fish Farm trial in the waters off Hawks Nest has ended, more than two years ahead of schedule. 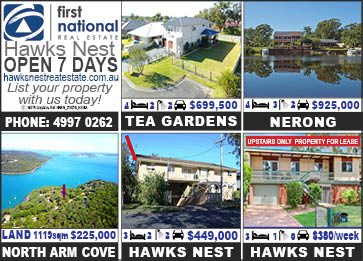 The joint venture, between the NSW Government and Huon Aquaculture, to breed Yellowtail Kingfish in pens was scheduled to run for five years.

A spokesperson for Huon Aquaculture told News Of The Area, “The trial allowed us to test the marine infrastructure at one of the most exposed aquaculture sites in the world.”

“Overall, we have shown that if the pens are maintained properly, they can withstand extremely high-energy conditions.”

Following the 2018 incident there were claims that the pens had been poorly maintained allowing barnacles to form on the pens.

This week Huon said, “As a result of the trial, some minor modifications have been made to the pen and netting design that will further improve the performance of the pens.”

“The whole point of a trial is to learn and we are confident that if the pens are cleaned and maintained appropriately they are up for the job.”

As for the fish which escaped, “We recovered thousands of escaped Kingfish which were put back into another pen and harvested shortly thereafter.”

The Huon spokesperson added, “We received very positive feedback on the quality and taste of the fish which is one of the reasons why we remain optimistic about the future of kingfish farming.”

Huon Aquaculture retains a commercial 62 hectare lease near the Port Stephens trial site but does not plan to farm it in the foreseeable future.

Huon CEO Peter Bender said, “We’d ultimately like to have Kingfish farming sites on both the East and West Coasts of Australia so that we can supply locally-grown Kingfish to the domestic and export markets, as well as locals.”