SPORTSPEOPLE often look different after a game than they do at the start. 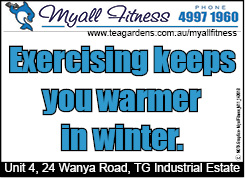 The picture below shows two very gallant sportsmen, albeit a bit ragged and in failing light, but know this, they had just battled out an epic 4 hour game that was only decided right at the very death!

Every end was close all the way.

Quality skills and sportsmanship all the way. Changes in the lead, elation, disappointment and comebacks right to the very end.

The Karuah Men’s Major Singles Championship had it all and in the end Tom Mulley won out in the clubs annual Champaign event beating the clubs most consistent player this year Dennis Ashbridge.

In a game format where first to reach 31 shots wins, every end saw lead changes. Dennis wrested the early and mid game ascendency to lead 25 / 14.

Then the unthinkable happened and Tom took 14 unanswered shots by simply brilliant bowling to take the lead 28 / 25! Dennis fought back first to 28 all, then to take the lead back at 29 / 28. Tom rallied to get first to 30 / 29, then, on the last end, picked up the shot to take the position of reigning Club men’s singles champion for 2018, winning 31 / 29. It was a final described by Kim Post a keen follower of the game as “a great final, just what a final should be, fought for every step of the way”.

I referred earlier to Dennis as one of the Club’s most consistent players.

He truly earned that title in 2018, having finished as runner up in the championship 4s, Triples, pairs and now the Major Singles. He still had a smile and handshake for Tom after the game. A great sportsman and great player, victories will come Dennis, well played. All hail Tom Mulley, Club Champion in the Major Singles for 2018.

Still plenty to come at Karuah RSL Bowls club. Mixed pairs, Matara, 3x3s, and Pennant Finals and of course our weekly social gala games on Tuesday, Wednesday or Sunday. If you would like to try the sport or you are a player looking for a game, come on down. Names by 09:30, first bowls at 10:00. Best green on the coast and friendliest players! See you at Karuah.