Great Lakes deputy mayor, Len Roberts, said he was hoping to see positive results for the North Hawks Nest development by the end of the year. 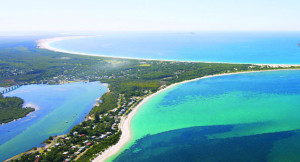 It comes after the Department of Planning office in Newcastle agreed to extend its approval of the North Hawks Nest development for an additional three years.

“We’re hoping to see some good results soon. This is a sufficient amount of time to start the rezoning process,” Cr Roberts said.

The Great Lakes Council and NSW government currently have an agreement that development can go ahead on the eastern side of North Hawks Nest if the western side is handed over to the Myall Lakes National Park as an environmental offset.

For this to occur, landowners need a developer with “deep pockets” who can buy out owners along Mungo Brush Road, and hand overlands on the western side to the National Parks and Wildlife Service as an offset to develop land on the eastern side.

“The land owners are starting to talk and hopefully they can reach an agreement,” Cr Roberts said.

The Department of Planning has allowed this pre-approved master plan to be active for another three years.

Cr Roberts explained that this action means any developer who decides to pursue the matter over the next three years won’t have to prepare new planning documents and supporting information.

This would otherwise have been a huge expense and possible deterrent for development.