Woken in the middle of the night by the sound of her glasses dropping to the ground, Loretta Baker then felt a slithering across her feet. 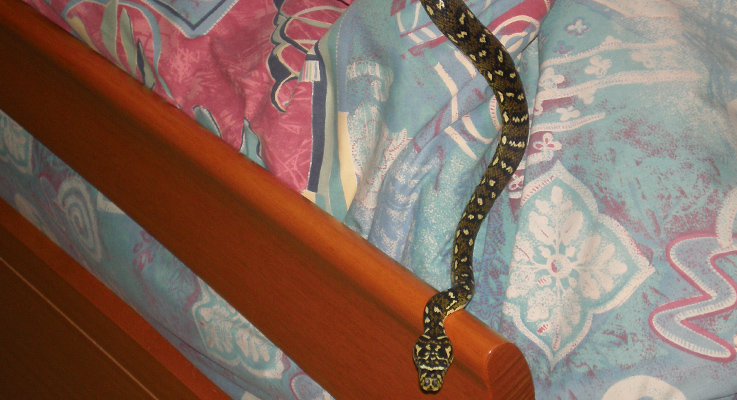 The Hawks Nest woman let out a scream and her husband switched on the light to discover their unwelcome bed fellow, a five foot diamond python.

“It was the early hours of the morning so we didn’t know what to do,” Mrs Baker explained.

“We called Raymond Terrace Police Station and they were able to put us onto someone who could come and get it,” she said.

While waiting for the snake catcher to arrive, the Baker’s watched the python slide under the bed and coil itself up before curling up on the doona.

Mrs Baker believes the snake got into the house through the garage door which she always leaves open about 6 inches to let the breeze through.

“We won’t be leaving it open anymore,” she said.

“They don’t normally get into houses but if you leave the house open it’s always possible,” he said.

Mr Hodges said if a snake gets inside it’s best to call someone to collect it.

“Even small snakes can be venomous,” he said.

If a snake is in a room, he suggested blocking off the room, shutting all the doors and putting a towel under the doorway.

“Never try to attack a snake,” he said.

“It’s illegal and cruel and can lead to people getting bitten.”

Mr Hodges said the python was captured before being released into nearby bushland.

He said diamond pythons were a threatened species which needed to be respected.

The Native Animal Trust Fund is always looking for volunteers and donations.

For more information go to www.hunterwildlife.org.au. To report a wild animal in danger or in your home call 0418 NATIVE.