Nearly half a year after being stolen from the roof of Hawks Nest Newsagency, Pete the Pelican has been returned. 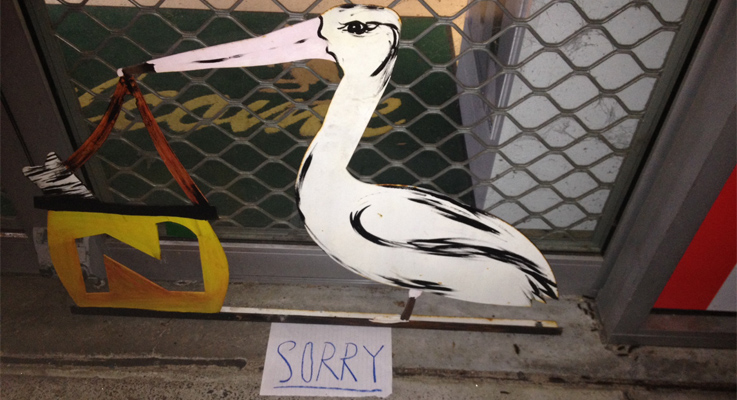 Owner of the newsagency, Hugo Elstermann, said he was “shocked and surprised” to discover the missing pelican waiting at the entrance to his shop with the simple but touching note ‘Sorry’ left next to it.

“Obviously someone’s conscience got to them,” Mr Elstermann said.

He said CCTV cameras simply showed a single, hooded man who did not reveal his face, dropping the pelican at the newsagency’s front door.

“To the person who left him at the front door, we just say thank you,” he said.

Mr Elstermann said somebody must have climbed onto the newsagent roof last August to remove the pelican.

“They risked their own safety just to take him,” he explained.

“We realised he was gone when customers started alerting us that Pete wasn’t to be seen anymore.”

It was the second time the newsagency had their iconic pelican, newspaper between his beak, taken from their roof.

“It’s been nicked twice. The first one disappeared about five years ago and was found in scrub when they did the widening of Tuloa Avenue,” he said.

The cut out pelicans are an icon on the Myall Coast area with others located at the police, ambulance and fire stations.

Pete the Pelican will now be returned to his “pride of place” on top of the Hawks Nest Newsagency.

The pelican figure on top of the Hawks Nest Newsagency roof has been stolen and owner Hugo Elstermann is frustrated by the senseless action.

Well known as “Pete”, this iconic local figure was erected to inject some fun into the community.

Mr Elstermann said, “Once again someone has risked injury by climbing on the roof using a rubbish bin and must have done this at night hence added another element of danger in the mix.”

It is not the first time this act of stupidity has been committed.

The popular newsagency erected a pelican on its roof some years ago only to find it taken.

This first pelican eventually was found over 18 months later during the widening of Tuloa Avenue up near Sanderling Road and it is hoped that this latest pelican will be returned to the store straight away.

Mr Elstermann has made an appeal on the stores Facebook site for his return and has offered a reward for its safe return.

“I just can’t understand it. We have a serial pest in town. I hope we can get to the bottom of it,” said Mr Elstermann.