A glorious Sunday morning at Bennett’s Beach, one of those balmy winter days that brings with it the promise of spring just around the corner. The perfect backdrop for the Annual General Meeting of the Tea Gardens Hawks Nest Surf Life Saving club. 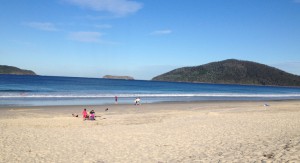 While not a huge turnout – devoted members gathered to hear the happenings of the past year and the plans for the future of this truly gold plated club.

With President Stephen Howell and Secretary Maxine Cook at the helm, the Tea Gardens Hawks Nest Surf Lifesaving Club still remains the only club in New South Wales to be awarded Gold status under the Quality Clubs Program.

Maxine Cook and Debbie Booth were awarded Administrator and Facilitator of the year at last year’s New South Wales Awards of Excellence.

They’ve backed that up by receiving the same awards at this year’s Hunter Branch Awards of excellence which puts them in the running for the State Awards at the end of this month.

Under the guidance of new club Captain Kelly Pietsch, the clubs 69 active members again ensured the Branches smallest club maintained no loss of life between the flags on Bennett’s Beach.

Captain Kelly Pietsch is also our Chief Training Officer and Natalie Skelly will again head up our Nippers program.

So what of the future  – Registrations will begin in September, the date to be announced shortly and the Club’s Open day is scheduled for 18 October.

And as always new members, volunteers and sponsors are always welcome.

Even if you don’t want to enter the water you can become an active patrol member.

For more details or to learn more about the Club you can head to the website teagardenshawksnestslsc.com.au