On Tuesday afternoon 14 April 2015, a 21 year old male formerly from Stroud and now living at Hawks Nest has driven his blue Ford Falcon sedan from the intersection of Pindimar Road onto Myall Way. 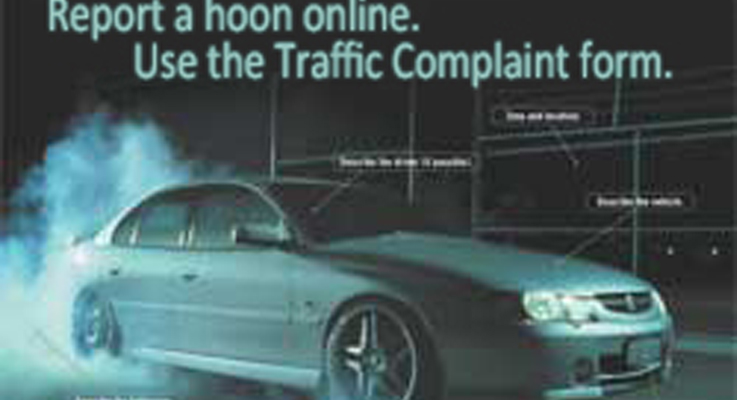 At this time he has accelerated with such force his tyres have lost traction and he has conducted a “Burnout” for distance of some 25 metres.

The vehicle was allegedly zig zagging east on Myall Way before he has lost control and careered off the road and down an embankment.

If anybody witnessed this particular incident they are encouraged to contact Tea Gardens Police with information.

In related news, Newcastle Police and Traffic and Highway Command warn deregistration and vehicle confiscation are among a range of legislative tools they intend to use during an upcoming blitz on “hoon” behaviour.

Newcastle Local Area Command says it’s fed up with the dangerous driving and anti-social behaviour exhibited by a hooligan element congregating in the Newcastle area.

In response, police are about to launch a crackdown against illegal drag racers and drivers performing ‘burn-outs’.

Police remain supportive of genuine car enthusiasts but warn they will target drivers who engage in dangerous or unlawful activity.

The operation will take a different form than past compliance initiatives with police targeting not only those driving dangerously but spectators engaging in trespass, underage drinking, offensive behaviour, traffic obstruction and public order offences.

Newcastle Commander, John Gralton, said the “hoons” were risking their lives and those around them by racing in dangerous and unlawful conditions.

“Some of this behaviour may have been going on for decades, but we are serious about catching those who drive in a dangerous or potentially deadly manner,” Supt Gralton said.

“Ignore this warning at your peril. There will be consequences to your actions when you are caught.

“The Traffic & Highway Patrol Command, together with local police, will work together with Roads and Maritime Services and will consider the confiscation of vehicles and any necessary action for people that repeatedly break the road rules.

“We will be using evidence from social media and available CCTV to prosecute these matters.

“The illegal activity is attracting participants from Sydney, the Central Coast and across the Hunter. We have information about who is organising this illegal activity and we will be gathering evidence to prosecute them,” Supt Gralton said.

“You won’t know when or where we’ll turn up but car hoons – you’re on notice.”