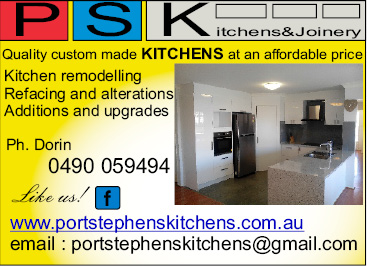 Geoff Brown is living the dream as a radio announcer, owning his own station, in a beautiful patch of paradise.

Geoff’s radio career is one which spans states, with his voice having been heard at some very special times.

In 1968 he started at Radio 2GB and one of the highlights of working within radio has to be the time he spent working with John Laws, the man with the golden microphone at 2UW.

“He was the master, I learned from him every day, he showed me how to do things and he was terrific to work for,” said Geoff.

Geoff Brown told News Of The Area, “We have been broadcasting in Nelson Bay for nearly twenty years and in that time we have supported every charity and not for profit entity that has asked us for help.”

For Brownie that’s part of being a part of the local community.

“I’ve been at more stations that the Southern Aurora,” said Geoff.

Locally Geoff has been a man who has served on many committees around the bay, as a past director and deputy chair of Port Stephens Tourism Ltd (now Destination Port Stephens), Nelson Bay and District Business Chamber (now Tomaree Business Chamber) and Nelson Bay Town Management, he believes in contributing to the community in which he lives.

Geoff’s son Rohan is the founder of Riot FM which broadcasts heavy metal from the Bay, Geoff offers his encouragement and support to Rohan, who he sees as a part of the next generation in radio.