IT was as if those who had made the ultimate sacrifice were smiling down from clear blue skies last Sunday, watching over the hundreds gathered on the banks of the beautiful Myall River to mark the 100th Anniversary of the Armistice. 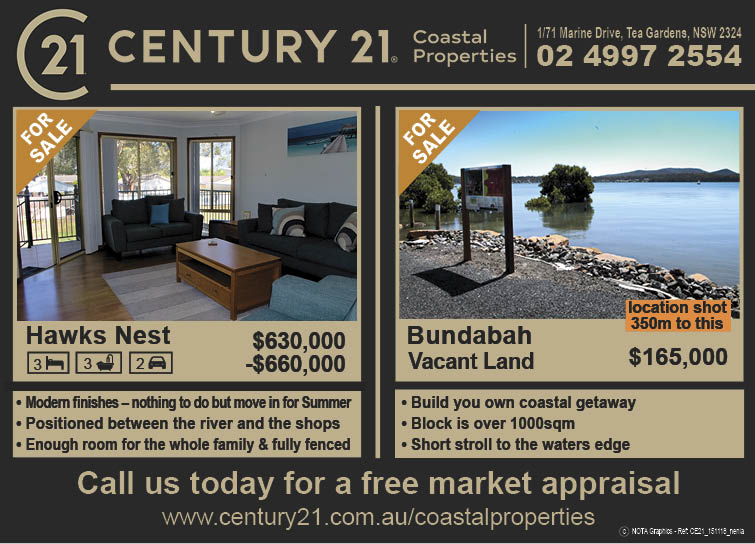 School children proudly marched alongside veterans, the strong and the frail, the very young and the elderly, coming together in a show of force that would not have been possible had it not been for the great sacrifices made by so many, over a century ago.

Members of the Karuah and Tea Gardens RSL Sub branches had spent many months preparing for the important milestone and the community responded in kind to mark Remembrance Day, 2018.

School children from all over the district had also planted a sea of crosses in the shape of a poppy.

In his keynote address, Rear Admiral Peter Sinclair told the gathering, “It is hard for us today to realise the extent of the carnage that occurred during the Great War.”

“Over 8 million soldiers were killed in what quickly became a war of attrition,” he said.

He went on to speak about Australia’s involvement in the Great War.

More than 60 thousand Australian lives were lost, a staggering 68 percent of the half million soldiers who served were either killed or wounded.

“We lost more men in just ten minutes in some of the battles in World War One than we lost in 10 more recent years in Afghanistan,” Rear Admiral Sinclair said.

The former Governor of NSW went on to pay tribute to all those who served in the wars that followed, World War Two, Korea, Malaya, Vietnam, and the ongoing conflicts in the Middle East.

“The men and women that we honour and remember here today,” he said, “gave us a precious gift of freedom.”

“We honour their courage, loyalty and mateship, which takes friendship to a higher plain.”

He concluded, “If we can carry that torch of freedom into the future then their sacrifice for us will not be in vain.”