When it rains, sometimes it pours. And when it pours for days like the super storm experienced earlier this year, for Aquaculture dependant businesses like Cole Brothers Oysters the results can be devastating. 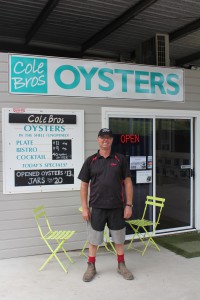 Some will say that’s nature doing it’s course and sometimes it can be cruel.

Speaking recently with Myall Coast News about the proposed Abalone Farm, 3rd generation Oyster Farmer Steven Cole from Cole Brothers Oysters at Karuah said, “We thought it was dead in the water years ago, we have had enough to worry about with extreme weather conditions recently that put us out of business for three months, we certainly do not need another risk to our business.”

“The April superstorm destroyed all of our racks South of the bridge, it was totally devastating to not only our stocks but for all the growers here. We are still three months behind due to that storm despite working flat out 7 days a week. The last thing we need is something else to worry about leading up to the Christmas rush,” he said.

Steven Cole stated, “Trying to meet 300-400 dozen Oysters to wholesale markets weekly to our Sydney and Brisbane clients, and producing about the same for local sales is hard enough, we cannot accept the possible disease risks this development could bring the industry here in Karuah and we wholeheartedly oppose it.”

“As a stakeholder in aquaculture in the area I would have thought someone from the Department of Planning, Fisheries or the developer themselves would have consulted us?”

Myall Coast News met with other Oyster Farmers in Karuah and discussed the proposed Abalone Farm, and learnt that they also were not advised of the development and verbally opposed the proposal due to risks to their business.

As part of the developers responses to concerns raised in the Environment Impact Study, as stated on the NSW Department of Planning website and in regards to Oyster Farmers in the area, the developer has quoted, “There are no operational oyster leases in near proximity to the proposed abalone farm and its discharge pipes.”

Clearly the Oyster Farmers at Karuah do not agree with and are concerned with this statement.

Myall Coast News is attempting to gain further statements from the NSW Department of Planning, the Developer and also from the Oyster Growers Association.