A RALLY attended by around 60 passionate locals was held in Karuah last week opposing changes to Mustoms Road. 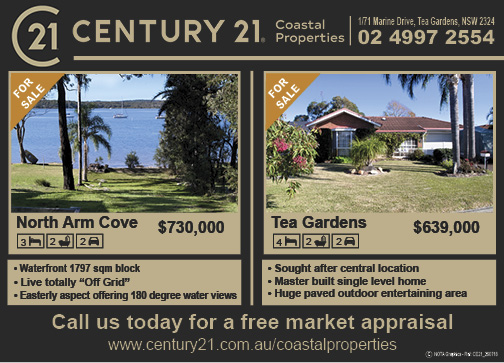 The road has been cut back to a one way road to allow a section of the road to be a pedestrian walkway.

President of the Karuah Progress Association, Fred McInerney told News Of The Area, “There are several reasons for opposition, the one way road with right of way for vehicles away from the Tarean road area has already seen many near miss situations and it is considered an accident waiting to happen.”

“The pedestrian section has been condemned as not good enough, mobility scooters and prams have difficulty travelling on it and although they are separated from the traffic by a flexible barrier, they are still very near to cars which travel along there.”

“As well, there have been many complaints from bus driver and delivery people.”

Port Stephens Council was represented by Councillors Paul LeMottee and Giacomo Arnott, along with Group Manager of Facilities and Services, Greg Cable.

“They did agree that it wasn’t a good outcome what had been done so far,” Mr McInerney said.

“They also undertook to have further consultation with community members to try to come to the best outcome.”

“Numerous people raised their concerns with me, both before and after the works were undertaken.”

“I met with Council and those concerns were dismissed,” Ms Washington said.

“I then wrote to Roads and Maritime Services seeking an urgent safety assessment.”

“RMS has now referred the item back to the Council Traffic Committee to be reconsidered.”

Len Roberts, CEO of the Karuah Local Aboriginal Land Council (KLALC) said, “KLALC has been concerned about the lack of pedestrian access to town and the dangerous conditions at that spot for about 20 years.”

“This is the place where a fatal accident occurred in the past with a pedestrian being hit by a car.”

Mr Roberts added, “KLALC accepts that the Council has acted in good faith and will continue to find a just and appropriate solution.”

“However, KLALC sees the only solution is a boardwalk on the river side of the road that will link the western area to the shops.”