The Karuah Roos Rugby League season is finally underway with the Roo’s first game at home against the Dungog Warriors. 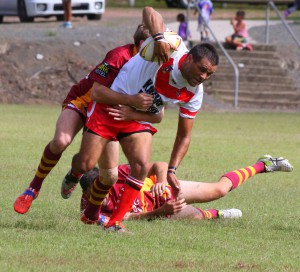 The Warriors made the trip to Lionel Morten Oval to meet the Karuah team and met strong resistance from the Roos pack.

The Roos this season were moved up a grade after such a dominating season last year.

They are now in the C grade competition with plenty of newcomers in the side.

Karuah’s unbeaten home ground run was looking in doubt in this first game of the season, until a late try made level the score at 16 all.

In the closing minutes is was anyone’s game however both teams held out to keep the final score at 16-16.

Try’s were made by Trent Saunders, Ryan Saunders and Joshua Page. 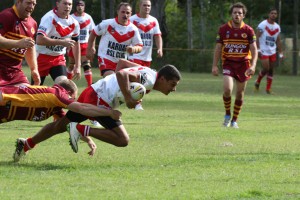 2 points went to Ben Langdon and 1 point to Trent Saunders.

Mitchell Napier got the Man on the Hill Award, Mitchell O’Bryan got the Coaches Award and the Pink singlet went to Aden Callaghan.

The Karuah Roos next game is another home game against Abermain.

Kick off is at 2pm this Saturday. Game day Sponsor is Bob Rice Screen printing.

Come along and make 2015 a successful year for the Roos.