Kookaburra Cricket Under 10’s played Western Suburbs Gold at McKeachies Run, for their final game for the season. 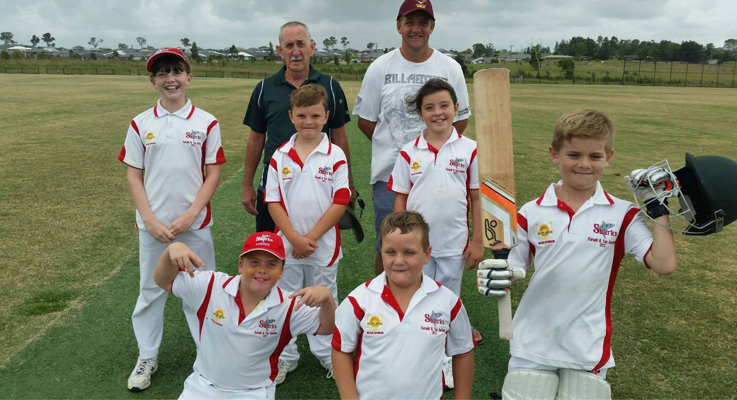 Even though we only had six players, James, Isaac, Danielle, Kaitlyn, Thomas and Sam all played like champions.

All players have come so far this season with all facets of their game improving from week to week.

After winning the toss, Danielle sent our team into bowl and even though we didn’t get the win we played strongly.

Our thanks to team coach, “BJ” – Brent, Allan for helping with the kids all season and also sharing the umpiring duties and to Debbie and Julie for scoring.

Keep playing cricket kids and we look forward to seeing you all return next year for another great season of cricket.

UNDER 12 DIV 2 MAITLAND DISTRICT JUNIORS – the young Sharks were winners by forfiet this week for the final round of the regular competition.

They now have a chance finishing in the top 4, either second or third, to progress into the final series.

Of mention for the season proper the marked improvement in the first year players was pleasing to say the least.

Each week they would turn and try not only that they played for the team.

The others who played their second year Luke McCarthy, Zac Watt, Mitchell Nott, Jai “Curly” Nott, Joquain Viera and Seth Gregory helped with the experience and all together lead the young Sharks to a more than successful season.

Particular mention to Luke McCarthy scoring 234 runs for the season at an average of 117.

Bowling honours were spread throughout the team with Luke, Zac Watt, Lachlan Groot and Mitchell Nott capturing their fair share of victims for the season.

Zac Watt and Luke McCarthy were Under 12 Dungog District representative players, well done, now holding the club in good stead within the district for being able to supply good, steady and strong players to the representative scene.

As a coach of these boys, Colin McCarthy, can only praise them for their ability to listen and learn but more importantly play the game fairly and with a bit of passion at times.

The parents of these boys were also extremely supportive and made the job of coaching the team a pleasure, according to the coach they affectionately call ‘Big Marn’…..thank you Zac Watt for that nickname.

Lets see what these young Sharks can do next weekend in their elimination semi final.

UNDER 15’s – VS West Suburbs – Karuah 7/102 defeated Western Suburbs 3/91.
Sharks lost the toss and were sent into bat making slow progress with the very tight Western Suburbs bowling and fielding outfit.
Western Suburbs were very slow with their over rate, only managing 19 overs out of the 25 allotted overs, being 7/102.
Best with bat, Will Smith 34, Aiden Bills 31 and Ben Woolard 12.
Sharks went into the field with a bit of confidence, but unfortunately their fielding let Western Suburbs back into the game, however with some strong bowling we managed to keep them 3/91.
Best with ball, Caleb Grimshaw 2/10, Jordan Barry 1/4.
Coach Mark Woolard urges all players to make it to training on Thursday at 4pm as we enter the final series, with one win away from a grand final spot.

Karuah batted first and were in trouble from the get go, being bowled out in the 27th over.

In this very young B grade team, they have been extremely competitive throughout the year.

Captain, Nathan Grimshaw and senior playing group, Mark Woolard, Toby Carrol, Daniel Watt, Tom King and James Smith have been very impressed all year with how the younger boys in the team held their own and competed each week and never giving up.

This now wraps up our B grade season for the year and we look forward to next season. 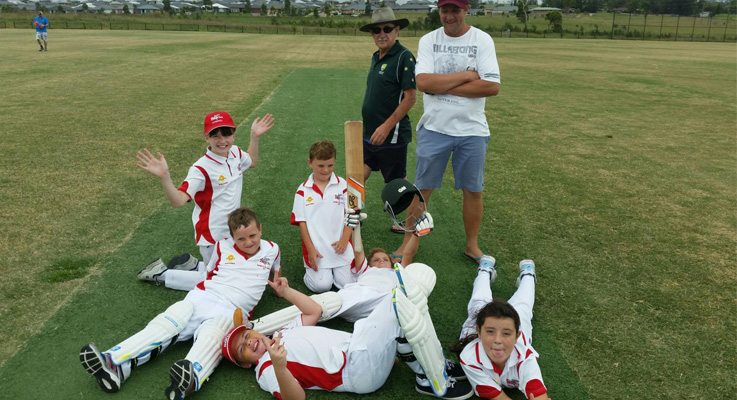 A GRADE DUNGOG DISTRICT VS Farmers – Karuah 9/82 defeated by Farmers 3/86 – the Sharks won a toss and for a minute were not sure what to do….they batted first for a time in a while.

They got off to a steady start to the day but were caught short on batting depth being dismissed in the 24th over for 82.

Jim Drinkwater top scored with 26 and was supported with a few double figure scores along the way.

All was not lost as they went into the field and a total of 82 was money in the bank and the opposition had to get it.

The Farmers Vacy side went about that and were solid from the top, passing the total in the 21st over with the loss of only 3 wickets.

The bowling ranks were a little dessimated this game, so the captain looked towards a tried and true machine, straight out of the mothballs came Jimmy Drinkwater.

There was a strong smell from the mothballs around the arena, with a mighty effort he delivered his first ball whilst the batsmen was rubbing his eyes from the smell of camphor hanging heavy in air.

The batsmen has lobbed the ball to mid off for a well taken catch.

Jimmy boy sent the batsmen to sheds with a well directed, “ON YOU’RE BIKE BUDDY”.

With that lingering mothball smell still heavy in the air the batsmen was well disorientated from the burning in his eyes still he wasn’t exactly sure where the sheds were or the bike he was to get on!

Well done Jimmy, the mothball legend finished with the fine figures of 1 over 1/1 and was heard to say coming off the field after the loss, “Skip, I’ve been waiting for the chance all year to show you I’ve still got it”.

Thank goodness the Sharks move into the final series and his bowling career is back on hold.
The Sharks at this stage finished equal 1st with Gresford for the minor premiership and depending on the quotions will determine who they will play in the elimination final next Saturday at Dungog.

A few players back from injury and work committments this week weakened the team slightly, but not excusing this, next week with their return will hold the Sharks in good stead leading into the semi final and hopefully beyond.

Karuah/Tea Gardens District Cricket Club invite you to attend their annual Trivia night coming up on Saturday 12 March 2016 at the Karuah RSL.

Cost is $10 per head, come along and join a table on the night or get together a group.

There will be five rounds of family trivia with games in between and lots of great prizes to be won.

For more information call Sam Rees 0421 599 148, there will also be a courtesy bus running on the evening and if you can, it’s still not too late to donate a prize for our raffle.
So please round up your friends and family for a fun filled night.