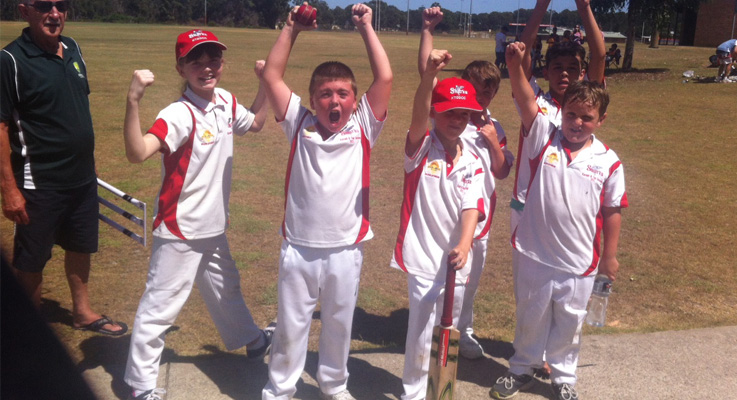 SHARKS batted first and were off to a great start with Luke McCarthy and Danielle Woolard making a partnership of 16, with both batters hitting 4’s.
The whole team, batted strongly with Tyrell, Thomas, Sam and Isaac plus two borrowed players from the opposition team.
The Sharks batted strongly and raised a total of 51 runs with 25 extras also being accumulated.

The Sharks then bowled and fielded to come up with the win.
Great team work was shown by all. Well done Sharks!
Its great to watch these kids having so much fun each week.

ON losing the toss the young Sharks bowled and were exceptional in their line and length.
Early break throughs saw Luke McCarthy on his first hat trick ball, but he came up short….good try.
The young Sharks dismissed the City United side in the 22nd over for 73.
Bowling honours to Luke McCarthy 2/3 and Max Long 2/12, with most of the other bowlers taking a wicket to help dismiss the City United side.
The young Sharks went about there work chasing down the total in just 15 overs with Zac Watt 29 retired not out and Mitchell Nott 27 not out.
They put on a partnership worth 68 runs in 9 overs.
The young Sharks are putting together these Katypes of partnerships each week making it easier for the other batsmen to follow on and get the totals being set by other teams.
They lead their competition and are doing exceptionally well with the number of first year players in the team.

UNDER 13’s No Results recorded

WINNING the toss and choosing to bat, sharks started slow with early wickets.
Ben Woolard 50 retired and Caleb Grimshaw 12 sharks seeing out the 25 overs 8/91.
Northern Suburbs start was better than the shark until the drinks break when the sharks regrouped and tightening the bowling and the fielding bowling Norths out for 89 with 2 balls to go.
Best with the ball Lucas Barry 2/2 Riley Barry 2/13 and Brent Johnson,Caleb Grimshaw,Brandon Watt, Will Smith,Copper Bramston all taking a wicket each.

C Grade Sharks Travelled to Vacy to play the Farmer

WINNING the toss and going into bat also starting slow as the batters found it hard to score, at the 22 over drinks break 3/40.
Stepping up the run rate after drinks piling on 154 runs in the next 20 overs posting there best total for some years 7/194.
Special mention to 14 year old Will Smith batting all 42 overs to be unbeaten on 73 supported by Toby Carroll 32, Darrin Watt 21.
Farmers were up for the fight score freely being 3/132 at the drinks break and chasing the runs down not long after drinks 4/199.
Best with the ball Ashlee Grimshaw 2/48 and Cooper Bramston and Will Smith both taking a wicket each.

ON losing the toss the Sharks bowled and were for their part in the game early with the Dungog side not scoring to freely.
A quick run feast saw the Sharks in trouble at drinks with Dungog 2/97.
Dropped catches by ‘Iron Gloves’ Colin McCarthy, behind the stumps added to Sharks woes during this period.
The Sharks regrouped at drinks before dimissing the Dungog side for 146 off 32.4 overs.
Bowling honours for the day went to Anton Farmer 5/27 off 5.4 overs.
The Sharks went out and a steady start by Bob ‘Poppy’ Ziehlke and Jim Drinkwater, supported by the top order, saw the Sharks pass the total at 3/148 in the 29th over.
Batting went to ‘Poppy’ Ziehlke 31 and Anton Farmer 44 not out.
A man of the match performance by Anton, nicknamed ‘Prince Harry’ for his striking resemblance.
This positions the Sharks in second place leading into the Christmas break.
Next week B grade have a well deserved bye round.

NO other results recorded.