Timber chips were flying to the sky and oysters were being supplied as the mercury rose last Saturday at the Karuah Oyster and Timber Festival. 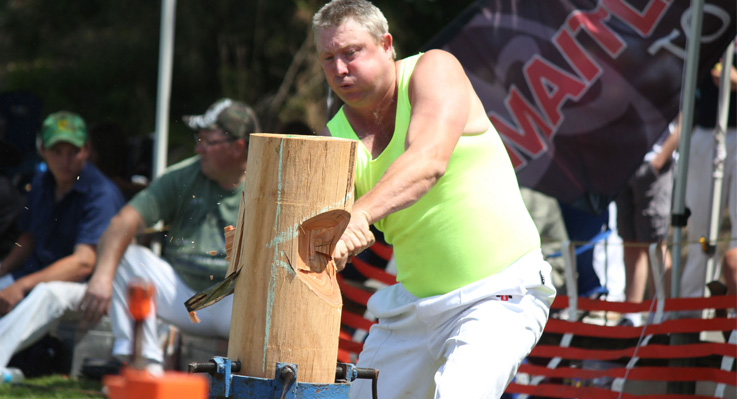 Longworth Park next to the bridge was a buzz of activity, smiling faces and with the best weather thrown into the mix, the organisers and visitors couldn’t have ever wished for a better family day out by the shores of Port Stephens and lower Great Lakes area.

Myall Coast News wandered around and chatted with the crowd for a few hours and left feeling like the festival has well and truly put Karuah on the map again as a fantastic destination and attraction hot spot in NSW.

Of course the local oyster growers like Cole Brothers, who were one of the sponsors the festival, were totally run off their feet with tastings and selling their best Sydney Rock Oysters to the swarm of visitors.

Cole Brothers also sponsored the inaugural ‘Oyster Eating Competition’ which was a crowd and participant favourite event allowing oyster lovers the chance to eat a dozen oysters in the quickest time with a hope of elevating themselves onto the final rounds.

The stalls and displays this year were excellent and included the Karuah R.F.S, Port Stephens Council, the Police Citizens Youth Club van including Police Officers from Nelsons Bay and even Lake Macquarie were on hand offering advice to the youth of the area.

A variety of clothing, arts, crafts and specialty goods were offered for sale at the stalls and if you went home hungry there was something wrong,..the array of food available was excellent, and in particular the Tea Gardens LIONS Club were cooking up a storm at their site.

The wood chopping events are a very competitive feature of the Festival and it was great to see a big line up of choppers all vying for the ‘Darrell Johnson Memorial Trophy’ that is proudly displayed in the Karuah RSL.

Young and old they lined up, sweated, chopped,…and chopped some more on some timber.

One by one with precision blows each of the blocks hit the ground.

Some with relative ease and while some struggled to split the blocks in two, they never gave up until the end which was celebrated with applause from the crowd.

A range of results will be published in next weeks Myall Coast News.

Changes On Horizon For Fishing Industry