Col Cookson of Myall Quays Newsagency said he would be forced to shut his doors if the threat of supermarket chains being able to act as lottery outlets became a reality. 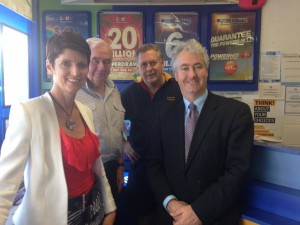 Under a new franchise agreement, the Liberal government is looking to allow major supermarket chains to sell lottery products for the first time.

“Lottery is an intricate part of our business, without it we’d have to shut the doors,” Mr Cookson said.

“I’d be a huge vote catcher for the first political party to state categorically that they will stop further negotiations with multinationals and keep lottery products with the agents they already have,” he added.

“Labor is clear on this issue: we won’t let the big chains sell lottery tickets and put local newsagents under threat – not now, not in three year’s time” Shadow Minister for Small Business Adam Searle said.”

“I know in the Port Stephens electorate, newsagents are not just businesses, they are meeting places. Often they are family-run operations that have become institutions in our community,” she said.

If elected as state member for Port Stephens in the upcoming election Ms Washington said she would do everything she could to support newsagents.

The current state government has dedicated a fund of $15 million to allow existing lottery agents to apply for up to $10,000 for approved shop refits to take financial burden off the newsagencies.

“Why would we spend money refitting our shops when we have no guarantee we are going to be able to sell lottery products exclusively,” Mr Cookson said.