KIRRA-LEA Rooney donated over 45 cms of her long, straight, blonde hair to charity last week to be made into a wig for young cancer patients.

But simply donating her ponytail wasn’t enough for the thoughtful six-year-old, who also raised over $1,000 for Variety – the Children’s Charity along the way.

The youngster’s selfless act attracted the attention of Prime News who arrived at Razors Edge Hair Studio in Bulahdelah to film the golden locks being chopped off.

“I don’t know why everyone was making a such big fuss about me having my hair cut,” Kirra-Lea told News Of The Area.

“All I was doing was helping some sick girls by giving them some of my hair.”

In front of her proud parents Melissa and David, brother Braydan and extended family, hairdresser Renee Ballantine snipped the long locks off before giving Kirra-Lea a completely new style.

“I love it, it looks amazing, Renee did a really great job,” Kirra-Lea said.

“It feels short, but I can still swish it around a bit and flick it from side to side.”

Kirra-Lea made the decision to donate her hair after visiting sick children in hospital and seeing many girls who had lost their own.

Mum Melissa, said Kirra-Lea instantly wanted to give them some of her hair, to help them feel more confident after having treatment for cancer.

“She just wants them to feel special, like a princess with beautiful long hair,” Melissa said.

“We are just so proud of her, she has a very kind, loving heart.”

Although Kirra-Lea loves her new short cut, the bubbly youngster said she can’t wait for it all to grow back.

“I want to keep growing my hair and donate it four more times,” she said.

“I just want to help more girls who don’t have any of their own.”

Kirra-Lea’s hair is now on its way to the Wigs for Kids Charity. 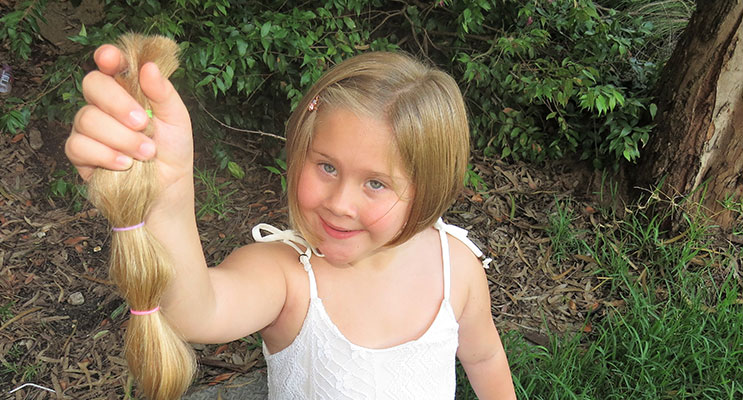