Liberal candidate for Port Stephens in the upcoming state election, Ken Jordan, said he was “absolutely gobsmacked” to learn of Labor’s support for newsagencies. 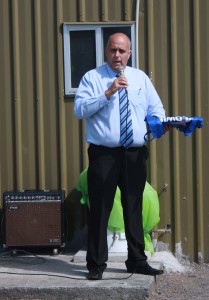 “I’m in total shock. It was the Labor government that sold NSW Lotteries in 2010 the Tatts Group so it is with breathtaking hypocrisy that the opposition can say it is now acting in the interests of newsagents,” he said.

Mr Jordan said the Liberal government has just signed a Memorandum of Understanding to ensure newsagents remain the major outlets for lottery sales while a deal on a franchise agreement between the parties can be reached.

Under the agreement that has been signed Tatts Group will not expand the network of franchises into supermarket chains for three years to 31 March 2018.

The NSW Government will also provide support to the existing network of newsagent franchises to update their point of sale shop fitting to the standard required by Tatts under the franchise agreement.

“This package will protect our local newsagents for a further three years and allow them to grow their businesses,” Mr Jordan said.

On Kate Washington’s recent visit to Tea Gardens with Shadow Minister for Small Business Adam Searle, she said that Labor would not put local newsagents under threat.