AS the bushfire season is now upon us, News Of The Area thought it to be a poignant time to share some stories about some of our volunteers that you will likely be seeing around the station, and our community.

Mrs Louise Morgan joined the Medowie Rural Fire Brigade in 2013 after her children had finished school.

Facing head-on into a fire isn’t how most people choose to spend their free time but that is often where you will find this Medowie mother of three.

Louise spoke with News Of The Area about her decision to Volunteer.

“I’ve always done volunteer work, whether it be the school canteen or helping out at the kids’ sports,” she said.

“I like a challenge, I’ve never really been a ‘girly-girl’, I like to push myself,” Louise said.

Brigade Captain Andrew Collins is always keen to sit down with anyone contemplating joining the Medowie Brigade, whose members have been instrumental in fighting some of the area’s biggest bush fires in recent years.

Community members are also encouraged to introduce themselves, and especially young children, to brigade members you may see around town.

As is the case with any emergency services, it is important that children feel some familiarity with rescue personnel if possible, so that they may feel confident in asking for help in a situation where they may be frightened.

Captain Andrew Collins is keen to quell myths that may still be floating around about fire fighters.

“People often consider firefighting as a male dominated arena and that females are delegated roles such as communications or catering,” Captain Collins told News Of The Area.

“Louise is one of four women we currently have here at Medowie and everyone pitches in shares the many roles on offer – they have the same opportunities, regardless of whether they are male or female,” he said.

Following an intensive training program, Louise Morgan is both Bush Firefighter and Village Firefighter certified, and she is completing her first aid certification.

“Volunteering with the Brigade is really flexible, I work full-time and have family and other commitments,” Louise told News Of The Area.

The Brigade meets each Saturday morning at the station on the corner of Ferodale and Medowie roads. 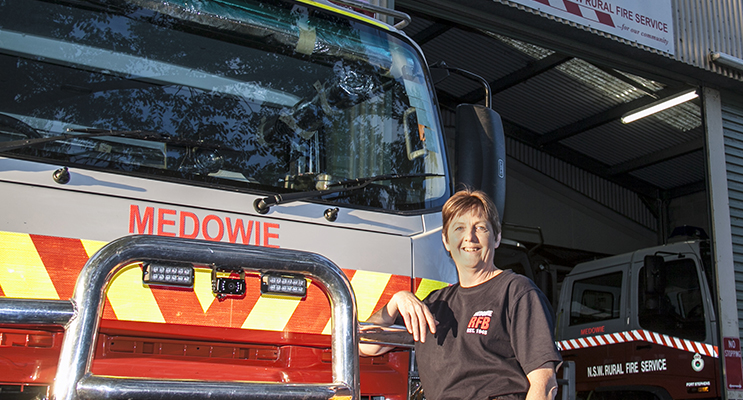