The body, believed to be that of a swimmer who went missing in water at Hawks Nest last week, has been located this morning.

A TWENTY year old man was missing in the water for three days after swimming at Bennetts Beach Hawks Nest last week.

On Friday 8 January, at around 4.00pm four friends were swimming when they were all caught in a vicious rip.

One of the men made it out of the water and ran to the Hawks Nest Life Saving Club to raise the alarm.

On patrol was professional lifeguard Ashleigh Searle who immediately engaged her knowledge and skill.

The beach was closed at the time but Ms Searle was still on the scene patrolling and ready to assist.

She went into the huge waves and despite the difficult task, was able to pull two of the men out of the water after they went under.

Police and rescue personal have labelled the effort of Ms Searle as ‘genuinely heroic’.

“The beach closed,” he said.

“The life guards were continually telling people to get our of the water and to at least move into the patrolled flagged area,” Mr Howell said.

“It’s hard to get through to people how important it is to listen to lifeguards on patrol.”

Mr Howell said, “Ashleigh did risk her life heading out in these conditions but that’s just what we do.”

After Ms Searle got the two men to safety it was understood another man was still missing in the water.

Police with boat and helicopters as well as the local Surf Life Club Saving boats and personnel continued to search the water.

The search continued for the days after with hopes slowly diminishing as time went on.

“The search is still ongoing even now, but have certainly been scaled back,” he said.

Officer Coyle confirmed that the search at this point is for recovery than rescue as hopes for survival all but gone.

“The efforts of the Hawks Nest Surf life saving Club have been absolutely tremendous,” he said.

“There is absolutely no doubt that if they weren’t patrolling, in particular Ms Searle, that further lives would have been lost.”

About 5.30am this morning (Tuesday 12 January 2016), police were called to the same beach after a member of the public saw a male body washed up onto the beach.

Whilst the body is yet to be formally identified, it’s believed to be that of the missing swimmer.

The death is not being treated as suspicious and police will prepare a report for the Coroner.

Police will resume their search this morning for a swimmer who went missing in water at Hawks Nest yesterday.

About 4pm (Friday 8 January 2015), police and emergency services were called to Bennett’s Beach, following reports of swimmers struggling in the water. 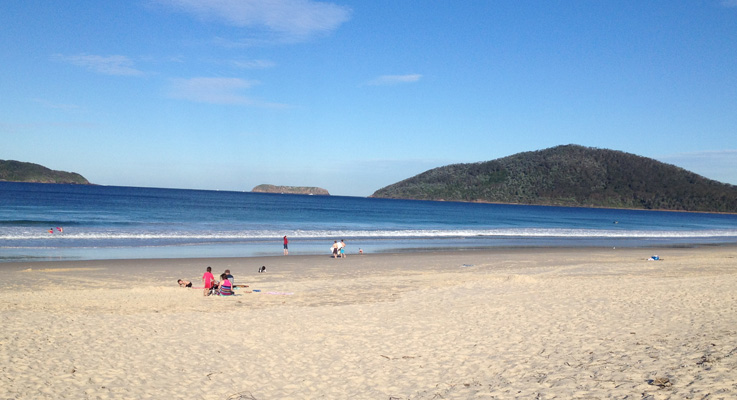 On arrival, police from Port Stephens Local Area Command were told four men were swimming at the beach, when two became caught in a rip.

One of the men was able to swim to safety, while the other man – aged 20 – was submerged under water.

Bennett’s Beach lifeguards attempted to locate the man; however, he was not found.

Police commenced a search that was assisted by a number of other agencies; including local Surf Lifesavers, Marine Rescue NSW, NSW Ambulance Paramedics, and the Westpac Lifesaver helicopter.

About 7.30pm, the search was suspended due to poor visibility and surf conditions.

The search is due to resume at first light today (Saturday 9 January 2016), and will involve local police, Marine Area Command, and PolAir, as well as Marine Rescue and local Surf Life Saving crews.