Ryan Messenger died on Tuesday in an excavator accident at a Karuah quarry, his mother, Janelle Russell released this statement:

BEING a parent whom has to lay their first born son to rest at the young age of 25 is going to be the hardest thing I have ever had to endure in my life.

Ryan has always been the life of the room- he was always the class clown! He is loved lots by his sister Teara , his brother Ethan, step-brother Rob and his niece Shaffira.

Ryan loved life to the fullest but loved his wife Alexandra more! They married in February this year, had built a home together and should have had a long loving life with each other. The kind of love they have will live on forever. Alexandra and her family loved Ryan as much as his own family loved him!

Ryan was a real ‘mates mate’, he never left a mate behind and he has a great bunch of mates (brothers).

My heart will take a long time, if at all it does, to mend from the sudden passing of Ryan.

I, as Ryan’s mother, would like to thank Hunter Quarries from the bottom of my very broken heart, for the utmost support and their willing to go out of their way to make us as comfortable as possible over the past few days. Hunter Quarries is not, from my point of view, at fault. This is a very sad accident that has taken place and is just that- an accident- and nothing more.

Hunter Quarries has shown our families nothing but compassion and support in many ways. All the people whom work within the Hunter Group are treated as a big extended family and I cannot thank them enough for all of their support.

My love for this young man will live on in my heart. Ryan’s name will be mentioned in our family life everyday and his memory will be kept alive for ever.

The family of Ryan Messenger would like to thank everyone for their messages of sympathy and support, and request that they be given privacy at this difficult time. No further statements will be made by the family.

Ryan Messenger with his wife Alexandra, 23, only married this year in February.

So what happened yesterday?

Ryan Messenger, of Raymond Terrace who worked at the Hunter Quarry, was driving the excavator at about 8:45am.

Mr Messenger had a heavy boulder in the front of the excavator. Port Stephens police have confirmed that Mr Messenger was repairing a washed away road on site of the Andersite Road quarry.

As he drove onto soft ground, the machine tipped onto its side, landing on the edge of the embankment.

As the excavator tipped onto its side the cabin, where Ryan Messenger was located, was crushed against the another large boulder on the edge of the quarry.

Police have confirmed that the excavator in fact did not rolled down the embankment which has been widely reported.  Police said the excavator came to rest on its side extremely close to the edge which made recovery very tricky on the day.

Police were expecting the body of Ryan Messenger to be recovered by 12:00pm (noon) today, Wednesday 10th September.

Ryan Messenger, 25, of Raymond Terrace, died when his excavator rolled down an embankment and landed on its side.

Police have said that its believed Ryan Messenger would have died instantly when the 45 tonne excavator landed on him.

In the statement by Hunter Quarries they said,

‘‘The Hunter Quarries family is devastated by the death as there is nothing more important than the safety, care and welfare of our employees.

‘‘Hunter Quarries would like to extend their deepest sympathies to the employee’s family, friends and co-workers.’’

Other media has reported that, “Mr Grugeon said he and his partners were shocked and deeply saddened by the death of their employee.”
The deceased’s wife,  Alexandra Messenger, was at the accident site for the most part of the day.
Police formally described the area as a crime scene late  yesterday.
Investigations are continuing.  Myall Coast News will keep you updated. news@mcnota.com.au if you have information

Hunter quarries have confirmed the man’s death and have issued the below statement.

It is reported that the recovery of the excavator that rolled will be complex and will take many cranes to reach it.

Myall Coast News is on the spot and will bring you more news on this as it comes and as we get to talk to appropriate people.

Email: news@mcnota.com.au is you are aware of further information about the accident. 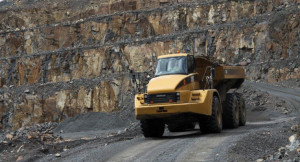 “The onsite emergency procedure was activated and external emergency services including the NSW Police, as well as Department of Resources and Energy and other relevant authorities have been notified and investigations have begun.

“Hunter Quarries would like to extend their deepest sympathies to the employees family, friends and co-workers.

“The employee’s family has been notified, and Hunter Quarries is providing full support to the family of the person involved and those affected at the operation.

“Hunter Quarries has suspended the activities at the facility until further notice.”

A man is believed to have died when his excavator crashed down an embankment at Hunter Quarries off Andersite Road Karuah, just after 8.30am this morning.

The police rescue squad is on the scene of a quarry accident near Karuah, north of Newcastle. 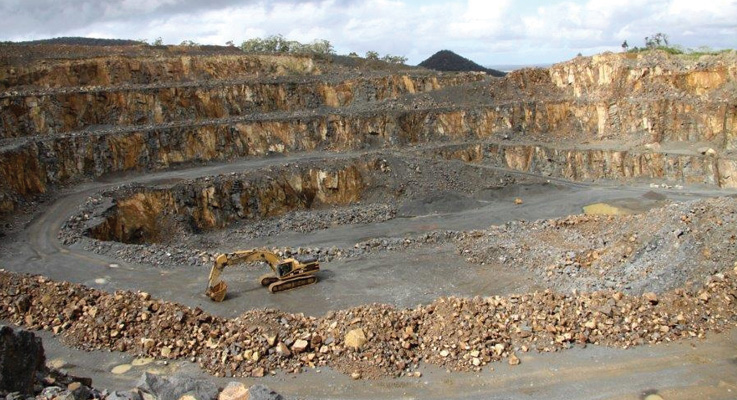 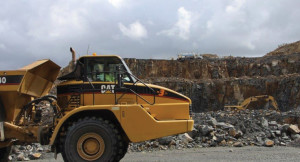