THE Minister for Veteran Affairs was put through his paces by former Special Operations Medics when he attended local veteran owned and operated business TacMed Australia this week.

The Honourable Darren Chester, Minister for Veterans Affairs, was exposed to training from TacMed’s highly trained former veterans including being immersed in virtual reality usually reserved for military personnel and first responders.

The team jumped at the opportunity to showcase their future training methods to the Minister who was in the region to visit veterans and veteran run businesses.

The virtual reality scenario transported the minister into a scenario with two casualties and multiple other threats in a metropolitan back alley.

His mission: to find the patients and provide urgent life saving medical aid.

“I was somewhat reluctant to get involved, to put the goggles on I thought it would be like watching an arcade game but I was blown away by just how life like it was and immediately recognised the training and learning opportunities for our first responders and our combat personnel.

“I think the virtual reality world is incredibly filled with opportunities to train more safely but also put people under stress and see whether they have the skills and the capability to do what can be a very dangerous job, without putting them into a dangerous situation in the first place,” he said.

The unique EmergiSim software used in the exercise has been developed by TacMed’s highly trained medics in a
joint venture partnership with the Spectre Studios development team.

Together they’ve created multiple scenarios, each highly stressful and realistic – from massive casualty incidents through to suburban situations faced daily by first responders.

TacMed Managing Director Jeremy Holder, was named in 2020 Australian Veteran Entrepreneur of the Year by the Prime Minister, an award which prompted Minister Chesters visit to the small local business this week.

Mr Holder was more than willing to introduce the Minister for Veterans Affairs to the reality of pre-hospital medical scenarios faced every day by serving medic’s and Australian first responders everywhere.

“We exposed him to how to assess and treat the preventable causes of death in trauma including major extremity bleeding, junctional bleeds, airway and collapsed lung which are the things that we would most commonly see on the battlefields but it’s just as important to treat here on the streets in Australia,” he said. 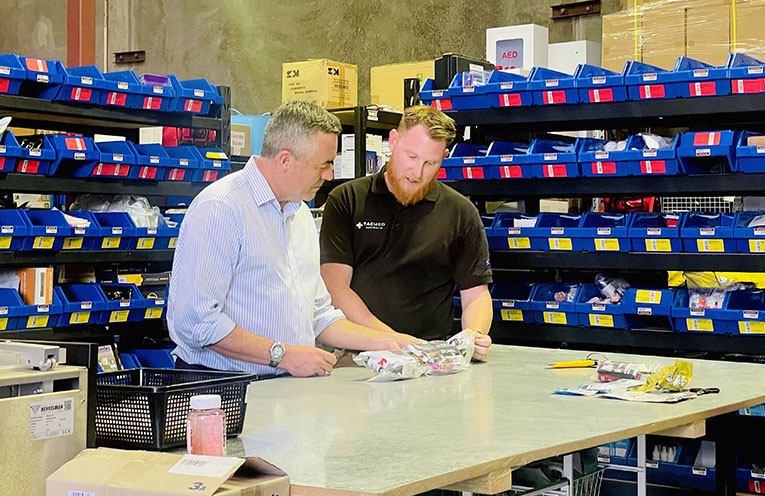