THE Port Stephens branch of the Men Of League Foundation are hosting another charity event for this worthwhile cause, at Nelson Bay Golf Club. 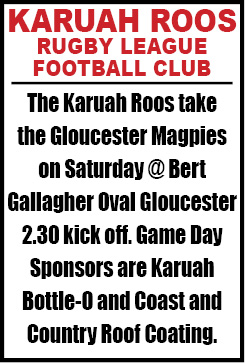 With one week to go, we take a look at the ‘Hand In Hand’ dinner on Saturday night, which incorporates three guest speakers, auctions and live entertainment by The Hummingbirds.

There is a distinct Newcastle Knights flavour to the three guest speakers with John Quayle, Ashley Gordon and Mitchell Pearce all having strong links to the club.

Quayle was a past player with Easts and Parramatta before becoming one of Australia’s best sports administrators.

Not only taking the fight to Super League as General Manager of the ARL, but also joining SOCOG who implemented the best Olympic Games the world had seen at Sydney 2000.

More recently he has been a major part of the team who has helped the Knights get back on their feet, no small achievement.

Gordon was the club’s first signing, while he was still in high school, exciting and enthralling many Knights fans during the early years.

He went on to win the Dally M Winger of the Year award in 1990 and has continued to be a big influence within the Newcastle rugby league community.

Mitchell Pearce is the current Knights co-captain and halfback, however a torn pectoral has severely reduced his season.
News Of The Area caught up with Mitchell ahead of Saturday’s dinner.

“The Men Of League Foundation is really important for what it does for the game we play and love, and looking after past and present players,” Pearce told News Of The Area.

“I love being part of giving back, because the game gives us so much.”

“I also love spending time with old players, because the history of the game means a lot to me and I know it does to many of the boys.”

“You always learn something special when talking with those that have done it before,” he said.

When asked about Port Stephens, and whether he has experienced our beautiful Paradise, Mitchell was enthusiastic.

“My girlfriend and I get up there occasionally for a drive on weekends.”

“It’s a great part of the world, calm and peaceful,” he said.

And for all the Knights fans out there, Mitchell had some news on that pec muscle that’s kept him off the park.

“I’ll hopefully be back on the field in the next six weeks or so.”

“The injury is coming along well, but I have to get through the hard slog of training in the next month and play it as it comes.”

“It’s killing me not being out there,” he said.

We are sure many Knights fans feel the same way, Mitchell.

For more information on the Men Of League charity weekend, please contact Nelson Bay Golf Club or visit their website.