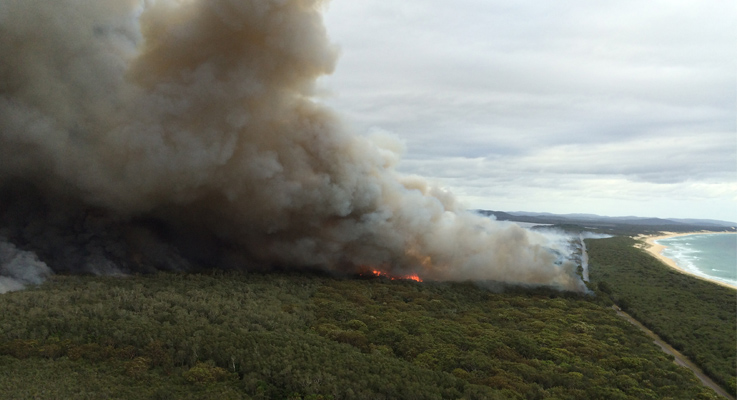 On Sunday 23 November a storm passed over Myall Lakes National Park causing a number of lightning-strike fires in the park.

Three fires were detected, one south of Mungo Brush Camping Area, one near Black Oaks at the southern boundary of the park and one to the west of Nerong.

Incident Controller Rural Fire Service (RFS), Jim Blackmore, said it was a great effort by all involved to contain the fires and reduce the impact on adjoining private properties.

“Thankfully there were no injuries or damage to property,” Mr Blackmore said.

“We are all very thankful to the RFS and Marine Rescue volunteers for their contributions.”

Adjoining private property landholders, NSW Water Police, Roads and Maritime Services and  Marine Rescue from Nelson Bay, were also on the scene supporting the fire-fighting efforts along the Myall River.

Under the Enhanced Bushfire Management Program, NPWS will pursue its plan to treat an average of over 135,000 hectares per year in 800 or more planned hazard reduction activities.

Mungo Brush, Banksia Green and Brambles Green camping areas in Myall Lakes National Park have since been reopened to the public after temporarily being closed.

“We’re very pleased to be able to reopen these campgrounds in time for the Christmas influx of visitors,” Mr Smith said.

“We’d like to remind visitors how important it is to observe fire bans in national parks.”

Mr Smith said it was also important for visitors to stay out of burnt bushland areas.

“Trees inside the burnt areas may have been damaged by fire and branches or trees could fall down and cause injury,” he said.

“These areas also need to regenerate and by keeping off the newly burnt ground it will protect and enable new growth to form.’