Lower Myall Integrated Project visit to Tea Gardens. Once more representatives from government and council visited Tea Gardens to explain further the project and its aims.

The group announced the new timetable for dredging which has been delayed due to further storm events and dates for the sand transfer to replenish Jimmy’s Beach.

Dredging is now set to commence around late June to early July 2015 with its completion now expected in October 2015.

This is to be recognised with an event ‘Celebration of the Myall’ taking place in October coinciding with the Myall River Festival.

Gordon Grainger of Myall River Action Group has been working tirelessly towards this goal with ferry trips to take place hourly to showcase the short cut dredging.

During October an announcement will be made regarding the tender for the sand transfer system which will be an ongoing project continually replenishing sand to the Jimmy’s Beach sites as needed.

Manager of Natural Systems for Great Lakes Council, Gerard Tuckerman said, “This is part of long-term management of sand-shoals and will continue for years to come.”

“We are continuing to study the issues of the constantly changing flows and water levels which impact on the area.”

“There will be noticeable changes to the system once dredging is completed and the lower Myall River returns to a more Marine environment,” Mr Tuckerman told Myall Coast News.

“This should show the public that the works as an ongoing project will benefit the Lower Myall system.”

A major new project by Great Lakes Council is expected to significantly improve the ecology of the Lower Myall River. 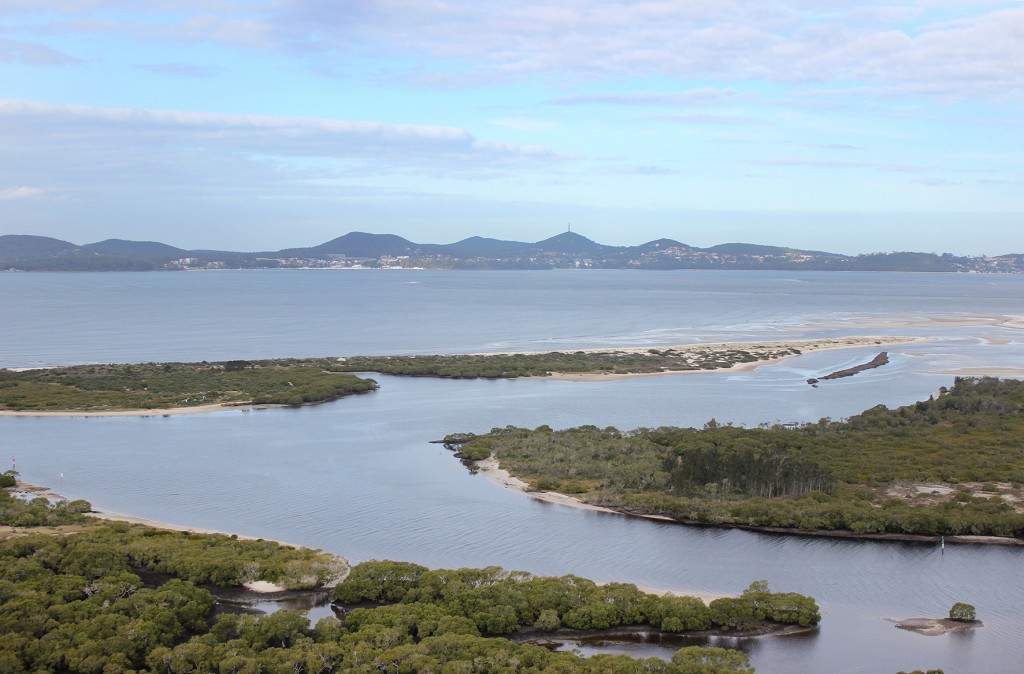 Having received $2.7million in Australian government and State funding, Council is about to start work on a dredging and restoration project designed to achieve a ‘triple-whammy’ of environmental improvements.

Council’s General Manager Glenn Handford said, “by dredging the Eastern Channel of the Myall River and relocating the sand to where it is needed most, the project will improve the water clarity of the river, protect the valuable wildlife habitat of Corrie Island, and renourish the erosion hotspot of Jimmys Beach. This project gives tremendous bang for the buck.”

Eastern Channel dredging The Eastern Channel of the Myall River will be dredged to relocate it some 300 metres east of its current location. This location will be closer to where the Channel was in 2001.

Dredging is scheduled to begin this month, and is due to continue until September this year.

Council’s Manager of Natural Systems, Mr Gerard Tuckerman said, “Council’s consultant, BMT WBM, has indicated that this would be a preferred position for the Channel in order to restore oceanic tidal flows to the Lower Myall River”.

Increased tidal flows caused by the dredging are expected to improve water clarity in the Lower Myall River, which is important to the local community and for the local tourism industry.

Council will work with the Office of Environment to monitor the lower Myall River after dredging is completed to assess the impacts that the increased tidal flushing will have over time.

The dredging also serves to preserve the status of Ramsar listed Corrie Island by reducing erosion of the island and keeping it separated from the mainland. This creates an important wildlife haven. 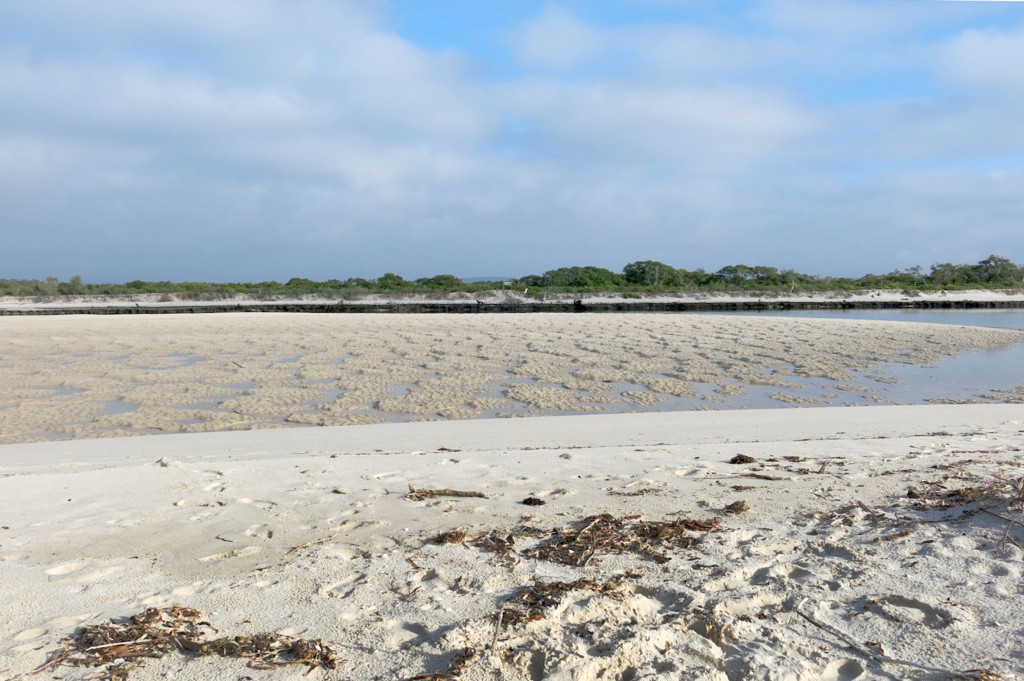 Additional work on the island includes the removal of exotic pines and bitou bush and the control of feral animals such as dogs, cats and foxes which are currently able to easily access the island. An island rehabilitation plan will also be developed.

Council Environmental Officer, Andrew Morris said, “Feral dogs can prey on the threatened and migratory birds that roost on the Island, and we’ve found plenty of dog tracks. Because of the sand build up in the river, predators can get over to the island quite easily.”

Council is working with National Parks to control feral predators and also to remove weeds such as bitou bush, wild pine and asparagus that have become established on Corrie Island.

Other additional works on Corrie Island will include a trial mangrove rehabilitation project and enhanced monitoring of birds. The information will be used to measure the impact of the project in enhancing Corrie Island’s use by threatened and migratory birds.

Sand removed from the dredging of the Eastern Channel will supply this year’s nourishment requirement for the Jimmys Beach erosion hotspot. The excess sand will be placed on Winda Woppa Spit. 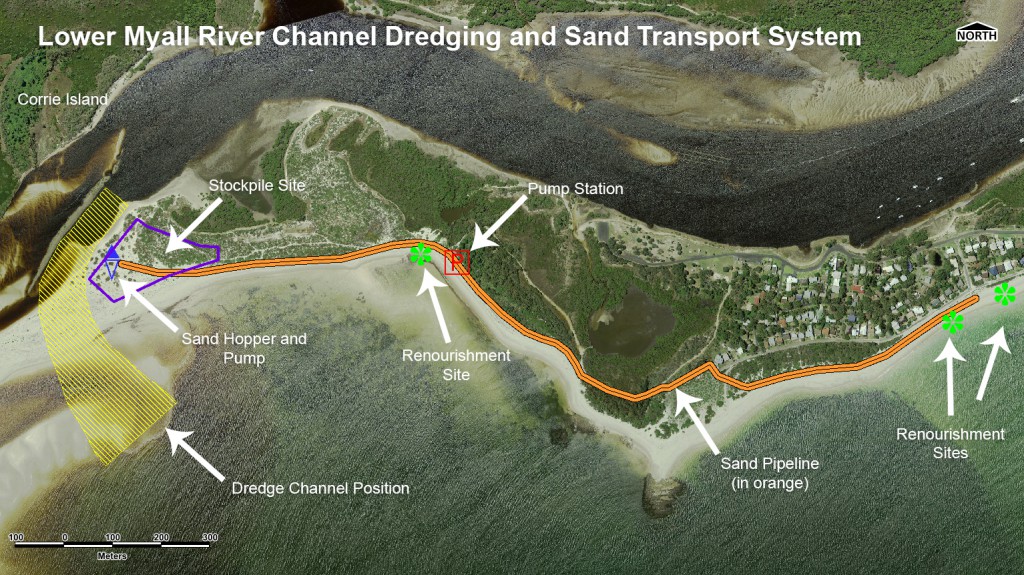 As part of this project a sand transfer system involving a hopper, pumping system and pipeline will be built to transfer sand from the Spit to replenish Jimmys Beach.

“Rock walls, groynes and other structures have all been examined, but establishing an ongoing sand nourishment program is the most financially sustainable option for maintaining Jimmys Beach and to provide a buffer to protect The Boulevarde behind it. It’s expected to reduce the total cost of protecting and maintaining the Beach from the current $600,000 per year to $200,000” said Mr Tuckerman.

This option will provide a long term and more gradual supply of sand to Jimmys Beach, reducing the need to rely on trucking in sand during emergency storm events.

This is the first time such a scheme will be utilised for managing an erosion hotspot in NSW.

Construction of the sand transfer system is scheduled to begin in the first quarter of next year.